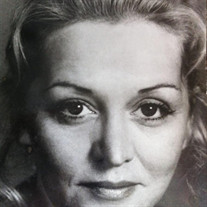 Jo Perkins Bailey of Houston, passed on May 17, 2021. She was a performer all her life. She began dancing in childhood, and later fell in love with acting. She joked that her acting roles “slowly went from woman… to old woman… to dying woman”. She recently worked alongside Willie Nelson in Waiting on the Miracle to Come, and in Richard Linklater’s 2011 ode to Texas Bernie, among other films. She also had roles in popular television shows like The Resident, Prison Break, and Revolution, and took on many roles in major theaters around Houston. She also worked as a casting director, as a commercial actress, in the wardrobe department (she truly could not sew): anything to get her on set. All that said and written out, her greatest decoration as an actress might have been the time Tennessee Williams told her in a bar that she’d’ve made a great Blanche. She had a lot of stories like that: the time Lauren Bacall’s dramatic entrance at the theater was ruined, the time Martha Graham kicked someone out of dance class for wearing their hair in curlers. She had a hundred more good ones about her children’s best foibles, and the parties she’d been to around Houston. She loved to get wrapped up in a good story, whether it was Harold & Maude, some Dateline murder she saw on television last week, the twenty episodes of Meerkat Manor she watched with her grandson, or her daughter’s work drama. Even her granddaughter’s roommate’s cousin’s romantic foibles could keep her occupied for a fun afternoon. In true actress form, she fudged her age a bit sometimes, and while I am fairly certain I can say she was born on September 6, 1938, I am not wholly certain. She grew up in Austin, before it was a metropolis, the only child of a single mother in an age where that was just a bit unusual. That bred a certain kind of scrappy independence in her. She studied dance at Sam Houston State University and the University of Texas, eventually earning a master’s degree. She married John Perkins, and had three children. She later married the love of her life in 1982. She always had a small family, and she loved and protected her own ferociously. She is preceded in death by her beloved husband, Charles Bailey, and her son, Marc Perkins, both of whom died this last year. She is survived by her two daughters, Monti Perkins and Julie Perkins Oatman, both of Austin, a son-in-law, Kenneth Oatman, and four grandchildren: Alexandra Oatman, of Los Angeles, Hannah Oatman, of Vermont, Rhodes Oatman, of Boulder, and Sophie Oatman, of New York City. She is also survived by countless friends who loved her dearly. Services will be announced at a later date when we can gather for a celebration of Jo and Charlie’s life. In lieu of flowers, please consider donating to the Houston Arts Alliance.

Jo Perkins Bailey of Houston, passed on May 17, 2021. She was a performer all her life. She began dancing in childhood, and later fell in love with acting. She joked that her acting roles &#8220;slowly went from woman&#8230; to old woman&#8230;... View Obituary & Service Information

The family of Jo Perkins Bailey created this Life Tributes page to make it easy to share your memories.

Send flowers to the Bailey family.