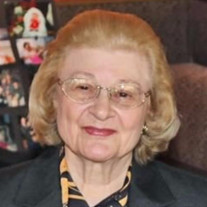 Joan Gardner Minette, age 87, passed away unexpectedly on Sunday Oct. 16, 2016. Joan was born on May 23, 1929, in Minneapolis, Minn. This dentist’s daughter spent her entire childhood in Browerville, Minn. In her early teens, Joan was invited to train to swim the English Channel, but she declined because she did not want to relocate. She was the Valedictorian of the Class of 1947, earning the highest grade point average in Browerville High School history. On scholarship, she attended Saint Benedict’s College of the Sacred Heart. She transferred to the University of Minnesota, where she earned a Bachelor of Arts degree in Home Economics. She worked as a Teacher, Home Economist and Substitute Teacher and was a self-taught hobby Nutritionist. Joan & Maurice were married on July 31, 1954 and lived in Endicott, N.Y.; Youngstown, Ohio; Cleveland, Ohio; and Marquette, Mich., then Dallas, Beaumont and finally Houston in 1978. Joan and Maurice cherished their time together hosting friends, dancing to country and big band music at different venues, but even more so, watching their children’s and grandchildren’s academic, musical, dance and sporting awards & performances. They have fond memories of trips abroad and multiple trips to Hawaii with their children and grandchildren. They especially enjoyed their 60th wedding anniversary party at the Houston Racquet Club with friends and family two years ago, and an extended family birthday gathering the day and night preceding her passing. While in Beaumont, Joan was active in the Epsilon Sigma Alpha service sorority and was named Sweetheart in 1974. In Houston, she became active in the Lancers Club and the Slovene American Club and was Woman of the Year in 1996. Joan is survived by her husband Maurice, their children: Maurice, Jr, Mary Kathryn (David) Nicholas, and Michelle (Brian) Baird; their grandchildren: John Porter, Melissa Minette, and Holden and Madeleine Baird; and great grandchildren: Chloe, Kaitee and Dakota Porter. A Memorial Mass will be celebrated at 10:30 a.m. on Friday November 11, 2016 at St. John Vianney Catholic Church, 625 Nottingham Oaks Trail. She will be interred with her parents, grandparents, and uncle at Hillside Cemetery in Minneapolis, Minn. In lieu of customary remembrances, the family asks that contributions in honor of Joan be directed to the Alzheimer’s Association or a charity of one’s choice. Visit www.DettlingFuneral.com to leave tributes.

Joan Gardner Minette, age 87, passed away unexpectedly on Sunday Oct. 16, 2016. Joan was born on May 23, 1929, in Minneapolis, Minn. This dentist&#8217;s daughter spent her entire childhood in Browerville, Minn. In her early teens, Joan was... View Obituary & Service Information

The family of Joan Gardner Minette created this Life Tributes page to make it easy to share your memories.

Send flowers to the Minette family.