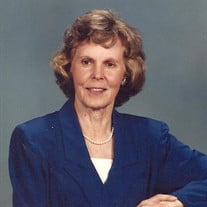 Joan Irene Morton passed away early on the morning of April 20, 2016, after a lengthy illness. She was born on July 8, 1930, in Canon City, CO, to Ivan and Gail (Hinrichs) Harrisberger. She is survived by her husband of nearly 66 years, Ben Morton of Houston; her three children, Bruce Morton of Austin, TX, Janet Davis (& Tommie) of Grimes County, TX, and Kimberly Rathbun (& Jim) of Wheaton, IL; and three grandchildren, Hannah, Caleb, and Abigail Rathbun. She is also survived by four Harrisberger brothers, Lee of Tampa, FL, Forrest of Hideaway, TX, Bill of Owasso, OK, and Tom of Houston; and one sister, Barbara Uptegraft of Edmond, OK. Her early life was in Florence, CO, until 1936 when CONOCO transferred her father and family to Ponca City, OK, where she received her education through her high school years. She then attended Northern Oklahoma College in Tonkawa, OK, and graduated with an associate degree in business in 1950. While there she was selected as the football queen of the school's Mavericks. She met Ben while on summer employment in 1949 with the Cities Service Oil Co., and they were married on August 12, 1950, just before Ben was recalled to active Navy duty. After relatively short Navy duty in Japan/Korea, they were able to reunite and be together in California as well as Honolulu. Civilian life commenced again in fall 1951, when they returned to Ponca City where Joan was employed in CONOCO's Personnel Division and Ben was with Cities Service. The couple made their initial move to the Houston area in June 1955 when Ben began employment with what is now known as the ExxonMobil organization. Up to the present, this led to family residences in Bellaire, TX; Wyckoff, NJ; London, England; and finally to the west side of Houston. Joan lived a full life as a wife, mother, homemaker, and volunteer. She was known as a good cook and avid seamstress who enjoyed travel, reading, tennis, piano, and involvement with church-related activities (including Bible study, a “Clown Ministry”, etc.). She also made time to be a den mother/troop leader for the Boy/Girl Scouts and to be an English-language tutor. The family is grateful for the care given to her in her final days by the skilled nursing section of Parkway Place along with Buckner Hospice Services. A memorial service to honor Joan will be held at 2:00PM on April 27, 2016, at Memorial Drive United Methodist Church, 12955 Memorial Drive, Houston, TX 77079. In lieu of flowers, you may wish to consider giving to a charity of your choice. Visit www.DettlingFuneral.com to leave online tributes.

Joan Irene Morton passed away early on the morning of April 20, 2016, after a lengthy illness. She was born on July 8, 1930, in Canon City, CO, to Ivan and Gail (Hinrichs) Harrisberger. She is survived by her husband of nearly 66 years, Ben... View Obituary & Service Information

The family of Joan Irene Morton created this Life Tributes page to make it easy to share your memories.

Joan Irene Morton passed away early on the morning of April 20,...

Send flowers to the Morton family.