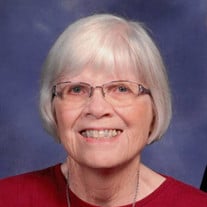 JoAnn Grady Satterfield, beloved wife, mother, grandma, sister and friend died peacefully on May 20, 2019 in hospice care at her son's home in Copperfield, surrounded by her family. JoAnn was born on December 13, 1932 to William & Maxine Grady in South Dakota. She grew up in California where she taught elementary school before moving to San Francisco where she met and married her husband Carroll. The family moved to Houston in 1974 where JoAnn continued her teaching career until retirement at the age of 70. JoAnn’s faith played a large role in her life which brought her great comfort and joy. She enjoyed serving others through many different volunteer organizations including the Houston Charity Guild of Catholic Women, St. Joseph Coat of St. John Vianney and the Alley Theater. She also enjoyed many spiritual retreats and day of prayers at the Cenacle Retreat House. JoAnn is preceded in death by her parents. She is survived by her husband of 61 years, Carroll Satterfield; two sons: Gary Satterfield and wife Jan; Brian Satterfield and wife Kathleen; two daughters: Karen Reilly Satterfield; and Suzanne Brown and husband Gary; ten grandchildren: Tim Satterfield; Kevin Satterfield; Kelly Johnston; Scott Satterfield; Chris Reilly; Kimberly Reilly; Jessica Boisvert; Grady Satterfield; Brett Satterfield; Colby Satterfield and two brothers: Don Grady of Visalia, CA and Dan Grady of Fresno, CA. A visitation with family will be held from 6 pm until 8 pm on Wednesday, May 22, 2019 at the Dettling Funeral Home, 14094 Memorial Dr, Houston, TX 77079. Mass of Christian burial will be held at 10:30 am on Thursday, May 23 at St. John Vianney Catholic Church at 625 Nottingham Oaks Trail Houston, TX 77079. A reception will be held in the St. Jude Hall at St. John Vianney immediately after the Mass. A private interment will take place at the Houston National Cemetery on 10410 Veterans' Memorial Dr, Houston, TX 77038 at a later date. In lieu of flowers, contributions in honor of JoAnn may be sent to the Cenacle Retreat House Sisters from whom JoAnn received much love and inspiration. Their address is 12211 Memorial Dr. Houston, TX 77024.

JoAnn Grady Satterfield, beloved wife, mother, grandma, sister and friend died peacefully on May 20, 2019 in hospice care at her son's home in Copperfield, surrounded by her family. JoAnn was born on December 13, 1932 to William & Maxine Grady... View Obituary & Service Information

The family of JoAnn Grady Satterfield created this Life Tributes page to make it easy to share your memories.

Send flowers to the Satterfield family.