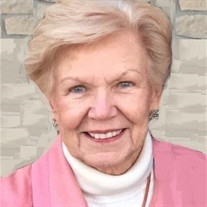 After a lengthy battle with breast cancer, JoAnn Ely Suthers passed away on March 16, 2019. She was born to Lena and Boyd Vick Ely on September 11, 1935 in Russellville, Kentucky. She is preceded in death by her husband, Brian R. Suthers. JoAnn is survived by daughter Vicki and husband John Albus, their son, Derek and wife Sarah and their sons, Ben and Ethan and daughter Britt and husband Mike McCrary and thier son Connor; daughter Kimberly Suthers and her son Robert; and daughter Susan and husband Scott Ayers and their children Christopher and Amy. She is also survived by her brother Larry Talley of Mesa, Arizona; and sister, Myrhl Watford of The Villages, Florida, plus numerous nieces and nephews. After Business School at Western Kentucky, JoAnn worked in Nashville where she met Brian Suthers. Brian was a Vanderbilt Graduate Student from England and after 8 months, they were married and JoAnn began her career as a mother and Household Manager. After receiving a PhD in Chemistry Brian began his career with Shell Chemical Company; a long career that took them to Houston, the San Francisco area, New York, Chicago and back to Houston. Friends from Shell became more like family forever. JoAnn and Brian first loved tennis and later became dedicated golfers., JoAnn was active in the Women’s Golf Assoc., a member of Pine Forest Country Club and a member of ACBL Unit 174. She volunteered in the Kitchen Ministry of MDPC, the Assistance League of Houston and at Memorial City Hospital for many years. She loved duplicate bridge, books, theater and all her travels at home and abroad, always ending with a visit to England. Summers spent in Vail Valley with family and friends were a high light for over 20 years. Family always came first and their three grandchildren were their greatest joy. A Visitation will be on Monday, March 25, 2019 from 6-8pm at Dettling Funeral Home, 14094 Memorial Dr, Houston, Texas 77079. A Memorial Service will be held on Tuesday, March 26, 2019 at 1:00pm in the Chapel at Memorial Drive Presbyterian Church, 11612 Memorial Dr., Houston, TX 77024 with a reception following in the Parlor. In lieu of flowers, the family suggests contributions to METAvivor or the charity of your choice.

After a lengthy battle with breast cancer, JoAnn Ely Suthers passed away on March 16, 2019. She was born to Lena and Boyd Vick Ely on September 11, 1935 in Russellville, Kentucky. She is preceded in death by her husband, Brian R. Suthers. JoAnn... View Obituary & Service Information

The family of JoAnn Suthers created this Life Tributes page to make it easy to share your memories.

After a lengthy battle with breast cancer, JoAnn Ely Suthers...

Send flowers to the Suthers family.