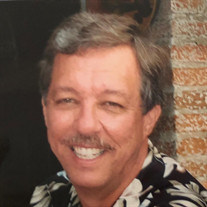 John Koetting Broussard passed away on September 17, 2021 at the age of 69 years after contracting COVID-19 and pneumonia. John was a proud native and lifelong resident of Houston, the son of Dede Ann Koetting and George Joseph Broussard. His parents and grandparents were native Texans and Houstonians, and he lived a life of which they would be proud. John was born on January 29, 1952 in St. Joseph’s Hospital in Houston. As a child, the Broussards lived in Charnwood, attended St. Anne’s and then St. Michael Catholic Church. John attended school at St. Anne’s, St. Michael’s, St. Thomas, and Robert E. Lee High School. John then attended the University of Texas, and he loved the Longhorns so much that he could barely utter the words “Earl Campbell” without getting a tear in his eye. John was a true son of Houston and was proud of his attendance at the city’s most famous events in the Astrodome, Rice Stadium, and Minute Maid Park. John grew up going to UH games at Robertson Stadium with his father and brothers, and had season tickets to the Oilers and Astros. He was in attendance for Mickey Mantle’s first Astrodome home run, for Elvin Hayes and the Cougars downing UCLA, and for the Astros opening of Minute Maid Park. It was no coincidence then that John’s most fulfilling professional time was as owner and operator of one of Houston’s oldest restaurants, Prince’s Hamburgers. John’s career began humbly in his father’s footsteps in the wholesale meat business. John eventually founded his own company under the name Houston Meat Purveyors where one of his clients was Prince’s Hamburgers on South Main. When Prince’s then-owner suggested in the early 1980’s that it was time to close the drive-in, John stepped in to help her keep it open. He eventually repurposed Prince’s and opened several stores throughout Houston. John was proud of his connection to Prince’s and its connection to Houston’s past. He relished his time with customers who would reminisce over the drive-in days and show off their classic cars. The love of his life was, unquestionably, Patricia Lynn Bailey. John and Patti met as children in school at St. Michael’s, and for over 60 years the two were inseparable. They married in June 1973 while still students at UT, then returned home to raise a family. John’s committed and enduring love for his wife was on constant display and will forever be a blessing to his children and their families. John is survived by Patti, their three children and spouses, and seven grandchildren: John Koetting Broussard, Jr, his wife Jessica, Luke (18), James (15), and Abigail (14); Emily Broussard Sperandio, her husband Mike, Georgia (14), Grant (13), and Joanna (10); and Bradley Joseph Broussard and his daughter Bailey (9). John was preceded in death by his parents, his brother George, and his brother-in-law David Evans. He is survived by his siblings Susan Evans, Patti Larkin and husband Larry, Bret Broussard and wife Debbie, Joe Broussard and wife Sharon, and Katy Antill and husband Kevin. John is also survived by his loving mother-in-law JoAnn Bering Sellingsloh, his aunts Renee Jongebloed and Carolyn Combs, and an extended family of cousins, nieces, and nephews whom he loved. John had a quiet, but enduring and sure Catholic faith that gave him purpose and strength throughout his life. John was a member of and regular Sunday morning parishioner at St. John Vianney Catholic Church. John lived his faith in humble ways: with the smile given to customers at Prince’s, in the way he quietly checked on and cared for his extended family members, but most of all how he loved and treated Patti as if the words of Ephesians 5:25 were inscribed on his heart. The entire Broussard and Prince’s family is forever grateful for the love and assistance that his friends, family, and caregivers provided to John in his final days. John’s funeral mass will be Thursday, September 23, 10:30 am at St. John Vianney Catholic Church, 625 Nottingham Oaks Trail. A visitation at 6:00 pm and Rosary service at 7:00 pm will be Wednesday, September 22, also at St. John Vianney. Visit www.DettlingFuneral.com to leave words of condolence for the family.

John Koetting Broussard passed away on September 17, 2021 at the age of 69 years after contracting COVID-19 and pneumonia. John was a proud native and lifelong resident of Houston, the son of Dede Ann Koetting and George Joseph Broussard. His... View Obituary & Service Information

The family of John Koetting Broussard created this Life Tributes page to make it easy to share your memories.

Send flowers to the Broussard family.