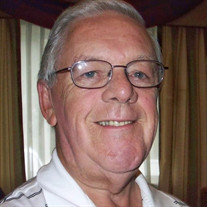 John Francis Courtney, 87, of Livonia, Michigan, passed away peacefully, on Friday, January 10, 2020 surrounded by family in Houston Texas. Mr. Courtney was born April 7, 1932 in Detroit Michigan to John S. and Lauretta (Cadarette) Courtney. John was preceded in death by his loving wife Loretta (Massaro) Courtney, his parents John and Lauretta and his sister Mary (Courtney) McGee. He is survived by his children, Sharon Courtney Walker and husband Mark, Thomas Courtney and wife Sally, Daniel Courtney and wife Thaisla; grandchildren, Andrew, Larissa, Olivia, Samuel, Luke, Dylan, Erik and Anna. John is also survived by his brother in law Charles McGee and his sister, Ann Courtney. John grew up in Marquette Michigan. He graduated from Northern Michigan University and upon graduation started working for United States Gypsum Company where he spent his entire career. John was working in Pittsburgh PA when he met the love of his life Loretta Massaro. They married and settled in Pittsburgh. His career moved them to Livonia, MI where they raised their three children and spent many happy years. John enjoyed traveling and spending time with his family and friends. He was passionate about his Catholic faith and was a devout parishioner at St. Colette Catholic Church in Livonia. John was an avid golfer and enjoyed many hobbies such as photography, woodworking, and model shipbuilding. He was a devoted husband, father and grandfather and was always so proud of his children and grandchildren. He was a great friend and neighbor and was loved by all who knew him He will be greatly missed. The Courtney family will be present to receive friends Saturday, February 22, 2020 from 11:00 AM - 11:30 AM with a Funeral Mass beginning at 11:30 AM at St. Colette Church, 17600 Newburgh Rd., Livonia, MI 48152. Visit www.DettlingFuneral.com to leave words of condolence for the family.

The family of John Francis Courtney created this Life Tributes page to make it easy to share your memories.