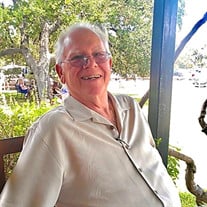 John William Dull, Sr. of Houston passed away peacefully June 1, 2021. Mr. Dull was born January 15, 1941 in Kansas City, MO to Wilna Kearns Dull and William Lee Dull. He is preceded in death by his parents, his wife Linda of 49 years and his sister Marilyn Callender. He is survived by his children, John W. Dull, Jr. & wife Christy of Houston, Deborah A. Dull of Houston and Chris Dull & wife Christie of Ft. Worth,TX; his 5 grandchildren, Megan, Caddie, Kathryn Mae, Conlee and Cotton; his sister Jeannie Koenig as well as numerous other loving family members. Johnny graduated from Lamar High School in Houston and continued his education at the University of Texas and the University of Houston. Johnny founded John Dull and Company, Inc. in 1973 to mark the beginning of his real estate career. He was a true entrepreneur and invested in several companies throughout his life. He was a patriot and took great pride in his home state of Texas. He was an avid sports fan, especially when coaching his children and watching his grandchildren compete. He rarely missed a game or meet. He served as mentor to many, including Darius Pruitt. You could always find his beloved Labrador Diablo at his side. He was also one of the best story tellers and took delight in hearing one in return. Johnny had many lifelong friends from his days at Lamar High School. His friends brought him great joy and laughter. Speaking of laughter, his smile was infectious. In his retirement years due to his love for the American Soldier, he was involved with the Wounded Warrior Project. Most of all, Johnny loved spending time with his family and loved the titles of Husband, Dad and “Gramps.” A Memorial Service for Johnny will be held Friday, June 11, 2021 at 2:00PM at St. John The Divine Episcopal Church, 2450 River Oaks Blvd., Houston, TX 77019 followed by a reception in Sumner’s Hall. The service will be lived streamed for those who cannot attend in person and will be available for 30 days following the service. Here is the link to his service: https://sjd.org/dull . In lieu of flowers, memorial contributions may be made to the Alzheimer’s Association, 2242 West Holcombe, Houston, TX 77030 or at www.alz.org .

John William Dull, Sr. of Houston passed away peacefully June 1, 2021. Mr. Dull was born January 15, 1941 in Kansas City, MO to Wilna Kearns Dull and William Lee Dull. He is preceded in death by his parents, his wife Linda of 49 years and his... View Obituary & Service Information

The family of John William Dull Sr. created this Life Tributes page to make it easy to share your memories.

Send flowers to the Dull family.