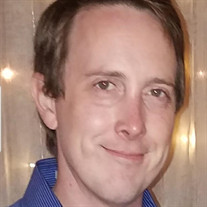 On Thursday, October 31, 2019, John Wright Henson departed this worldly life after a brief and sudden illness. He was 38 years old. John was born April 22, 1981 in Lubbock, Texas to John and Carolyn Sue "Suzy" Henson. He was the best surprise and blessing our family ever received. He married the love of his life, Rebekah Inez Boyce, on October 15, 2011. John graduated from Lubbock High School in 1999 and went on to graduate from Texas Tech University with a dual bachelor's degree in International Business and Marketing. He then went on to study business administration at the University of Houston Bauer College of Business, where he graduated with his Master of Business Administration. John loved spending time with his wife Bekah, their many close friends, and his beloved dog, Archer. He loved to entertain friends and family at their home where he would grill out. He was an amazing cook and enjoyed experimenting with new dishes, becoming quite the amateur chef. He loved music and was a talented guitar player, even writing his own music (though you had to sneak a listen as he was often too shy to share his talent). John was wicked smart and was constantly researching and learning. If he didn't know the answer, he was going to figure it out. He was fascinated with space and once dreamed of becoming an astronaut. He was always ready and willing to help a friend or a family member, be it with a computer problem or his sister who procrastinated packing until the night before she had to move across the state. He was easy going and never complained. Most of all, he loved his family, his wife Bekah, his friends, and his dog Archer. John is survived by his wife Rebekah, his parents John Warren Henson and Carolyn Sue "Suzy" Henson, his sister Amy Henson, his beloved dog Archer, and numerous aunts, uncles, cousins, brothers and sisters by marriage, nieces and nephews, and friends. The Henson family will be present to receive friends for visitation Thursday, November 7, 2019 from 12:00 PM until 2:00 PM at Dettling Funeral Home 14094 Memorial Drive Houston, Texas 77079. Funeral service will follow visitation at 2:00 PM.

On Thursday, October 31, 2019, John Wright Henson departed this worldly life after a brief and sudden illness. He was 38 years old. John was born April 22, 1981 in Lubbock, Texas to John and Carolyn Sue "Suzy" Henson. He was the best surprise... View Obituary & Service Information

The family of John Wright Henson created this Life Tributes page to make it easy to share your memories.

Send flowers to the Henson family.