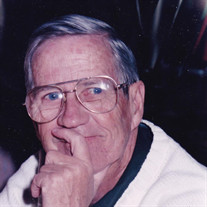 John "Jack" B. Cherry was born March 30, 1935 in Norfolk Virginia to John B. Cherry and Margaret (Shand) Cherry. As a small boy, the family moved to Columbus, Ohio where he eventually graduated from St. Charles High School in 1954. It was during high school where he met the love of his life, Mary Barbara O’Brien. After high school, he attended Xavier University in Cincinnati, Ohio. He and Barbara married in July of 1958. He started his career working as the Sports Editor of the Lancaster Gazette. He and Barbara returned to Cincinnati a short time later where he began to work as the Sports Information Director at his alma mater, Xavier University. While working at Xavier, he worked for the NCAA Tournament every spring, and also worked part time in the summers at River Downs Racetrack. Jack was also one of the founders of the St. Patrick's Day Parade in Cincinnati during this time. While in Cincinnati, he and Barbara had five children: Robert (who passed away shortly after birth) Jack, Lisa, Patrick, and Thomas. In June of 1972, the family moved to Baton Rouge, Louisiana where Jack became Assistant Sports Information Director at LSU. Then in late November of 1972, Jack accepted the position of Sports Information Director at the University of Kansas. In 1974, he decided to turn pro, becoming the Director of Public Relations with the World Football League Houston Texans. A few years later in 1976, he moved on to the NFL with the Houston Oilers, eventually becoming the Director of Public Relations. It was there that he was part of the Luv Ya Blue Era and made some of the deepest friendships of his professional career. It was an exciting time in the city of Houston, and Jack helped make it so by introducing fans to the Oiler Fight song after every score, Blue and White pompoms for a Monday Night showdown with Miami, and being instrumental in creating the Derrick Dolls Cheerleaders all to help market the team during what most people would term a high point in Houston's NFL history. He even had a small role in the trade that brought Earl Campbell to Houston by asking Bum Phillips what did he think John McKay would want in trade with the Oilers for the number one pick (who would be Earl Campbell) to which Phillips responded "Let’s find out" as he picked up the phone and called the Tampa Bay Buccaneers coach, making the trade minutes later. Eventually, Jack and his family followed coach Bum Phillips to New Orleans with the Saints from 1981 to 1985 before returning to Houston and going into private business. If you asked most people, they would tell you that Jack never met a stranger, could talk to anyone about anything, and was always willing to lend a helping hand. He was an avid sports fan and golfer, and was lucky enough to turn his passion for athletics into a career. He was never shy about sharing his opinions, political or otherwise, and was a wonderful storyteller who always had a joke or two to share. In his later years, his favorite topic for discussion was his grandchildren. Jack is preceded in death by his father John Cherry, mother Margaret Cherry, brother Bob Cherry and son Robert Cherry. He is survived by his wife of fifty eight years, Barbara, his sister, Margaret Krouse Fallerius, his children and their spouses Jack (Carey), Lisa (Gerard), Patrick (Kathy), and Thomas (Belia), and grandchildren Marisa, Megan, Sarah, Brianna, John, Elizabeth, Tommy, Christopher, and Michael as well as numerous nieces and nephews. In lieu of flowers Jack asked that donations be made to St. Judes Children's Research Hospital, 262 Danny Thomas Place, Memphis, TN 38105 and www.stjude.org The Cherry family will be present to receive friends Thursday, September 22, 2016 from 6:00 PM until 8:00 PM with a Vigil Service beginning at 7:00 PM at Dettling Funeral Home, 14094 Memorial Dr., Houston, TX 77079. The Funeral Mass will commence Friday, September 23, 2016 at 10:30 AM at St. John Vianney Catholic Church, 625 Nottingham Oaks Trail, Houston, TX 77079.

John "Jack" B. Cherry was born March 30, 1935 in Norfolk Virginia to John B. Cherry and Margaret (Shand) Cherry. As a small boy, the family moved to Columbus, Ohio where he eventually graduated from St. Charles High School in 1954. It was during... View Obituary & Service Information

The family of John "Jack" B. Cherry Jr. created this Life Tributes page to make it easy to share your memories.

Send flowers to the Cherry family.