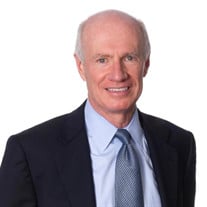 John David Norris of Houston, Texas passed away peacefully on April 25, 2022 at the age of 74 after a long, courageous battle with Alzheimer’s. John was born on August 26, 1947 in El Dorado, Arkansas to Mildred Leroux Norris and Jerome Clark Norris. John graduated from the University of Arkansas and went on to earn a law degree from The George Washington University School of Law. He spent most of his career with Houston-based Arnold, White & Durkee, one of the most prestigious intellectual property law firms in the country. John was an avid outdoorsman who enjoyed sailing, hiking, and running marathons, including the Boston Marathon in 2013. John is preceded in death by his parents and brother Paul Norris. John is survived by his wife, Sandy, of 36 years; his daughter and son-in-law, Millie and Lawson Mertz; son and daughter-in-law, Clark and Kristy Norris; and three grandchildren, Marion, Mort and Matthew Mertz. He is also survived by his brothers, Jim Norris and his wife Carol, and Phil Norris, as well as nieces and nephews. A celebration of Life and Memorial Service will be held on Friday, April 29 at 10am at Memorial Drive Presbyterian Church, 11612 Memorial Drive, Houston, Texas 77024. The family would like to thank Dr. Joseph Masdeu and his staff at the Nantz Alzheimer’s Center at Methodist Hospital, and the wonderful staff at The Auberge of Sugarland Memory Care Facility. In lieu of flowers, the family requests that memorial donations be made to the Houston Methodist Hospital in support of the Nantz National Alzheimer Center, PO Box 4384, Houston, Texas 77210-4384 in memory of John D. Norris. Visit www.DettlingFuneral.com to leave words of condolences for the family.

John David Norris of Houston, Texas passed away peacefully on April 25, 2022 at the age of 74 after a long, courageous battle with Alzheimer&#8217;s. John was born on August 26, 1947 in El Dorado, Arkansas to Mildred Leroux Norris and Jerome... View Obituary & Service Information

The family of John David Norris created this Life Tributes page to make it easy to share your memories.

John David Norris of Houston, Texas passed away peacefully on...

Send flowers to the Norris family.