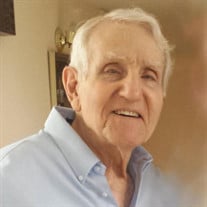 John Batiest Oggero 93 of Houston Passed away October 9, 2020. John was born July 23, 1927 in St. Joseph Hospital to parents Joe and Josie Oggero. He is preceded in death by his parents; he is survived by his wife off 66 years, Ann. Daughter Lisa Oggero, Son Darren Oggero. His brother, Father Roy Oggero and sister Lucille Moratto. Granddaughter Madeline Oggero. Nephews: Thomas Moratto, Mike Moratto, Joe Hughes, and Jeff Hughes. Nieces: Theresa Briggs and Holley Wright. John grew up in Houston and graduated from St. Thomas High School in 1945. He began work at an early age, 1st as a paper boy and then delivering groceries. He had numerous other jobs until joining the service. He served a tour with the Merchant Marines in England, and joined the Navy soon after where he was stationed on the islands of Guam and Saipan during World War II. As an adult he worked as an electrician for Rhom & Haas Chemical Company. Eventually he started his own business, Neero Inc. and worked there until he retired. “Bat” as he was known to friends and family, loved to play cards, golf and hunt, enjoying many exciting trips with his friend to their hunting lease in Junction, Texas; But it was the time he spent with his family at their ranch in Caldwell that he enjoyed most of all, working cattle and riding his tractor. He was a man, of faith, loved by all and could be counted on to help in any situation. The Oggero family will be present to receive friends Tuesday, October 13, 2020 from 6:00 PM until 8:00 PM with Rosary Service beginning at 7:00 PM at Dettling Funeral Home, 14094 Memorial Drive, Houston, TX 77079. The Funeral Mass will be celebrated Wednesday, October 14, 2020 at 10:30 AM at St. Elizabeth Ann Seton Catholic Church, 6646 Addicks Satsuma Rd. Houston, TX 77084. Following Holy Mass John will be laid to rest at 2:30 PM at Forest Park Lawndale Cemetery 6900 Lawndale St. Houston, TX 77023.

John Batiest Oggero 93 of Houston Passed away October 9, 2020. John was born July 23, 1927 in St. Joseph Hospital to parents Joe and Josie Oggero. He is preceded in death by his parents; he is survived by his wife off 66 years, Ann.... View Obituary & Service Information

The family of John Batiest Oggero created this Life Tributes page to make it easy to share your memories.

Send flowers to the Oggero family.