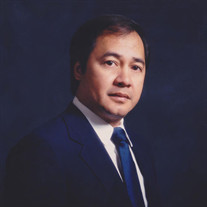 Dr. Jose Antonio Robles passed away peacefully surrounded by family at Memorial Hermann Hospital in Houston, TX on May 21, 2016 at 11:13 am. Born in Manila, Philippines on September 20, 1945, the eldest son of seven to Tito Robles and Soledad Rulloda, he grew up to the sounds of The Beatles and Elvis with aspirations of being a businessman, but ultimately taking the advice of his mother to become a doctor. Dr. Robles received his medical degree from the University of Santo Tomas in the Philippines in 1970 and served medicine and surgery residencies in that country. In 1977, he came to the United States and served an internship and first year surgical residency at St. Joseph's Hospital in Baltimore, Maryland. He completed a radiology residency in the Illinois Masonic Medical Center in 1978 and in July of 1980 completed a Residency in Nuclear Medicine at Baylor College of Medicine. In 2006, he received an MBA at Devry University. In 1977, during his medical residency in Chicago, he met and fell in love with Myrna Francisco and followed her back to the Philippines to propose a marriage. They then moved to Chicago and shortly after, a small town in Texas where he began his long career in radiology and started a family. He was a very charismatic and generous man with many talents including cooking, singing and playing the guitar, basketball, and billiards. He had a love for nature and always surrounded his home with plants and enjoyed gardening. He was a devout Catholic and was a member of Couples For Christ for several years and a proud brod of Tau Mu Sigma Phi of the University of Santo Tomas. His love for various arts such as music, movies and live entertainment were instilled in his children. Travelling provided the opportunity to form the soundtrack to his adventurous life with the musical sounds of The Beatles, Elvis, The Bee Gees, The Carpenters, The Beach Boys, Chicago and Steve Miller Band among other artists. He was a family man at heart and delighted in road trips from east to the west coast, frequenting exciting cities such as Las Vegas, Los Angeles, and Orlando. He is survived by his wife Myrna and their five children - Laura and her son Jude, Allen, Annette, Isabel, and Erika. He is also survived by his siblings - Marite, Lulu, Pete, Maruja, Tito Junior, and Marivic. His mother passed away peacefully in Manila on May 23, two days after his own passing, at the age of 94. The Funeral Mass will commence Tuesday, May 31, 2016 at 10:30 AM at St. John Vianney Catholic Church, 625 Nottingham Oaks Trail, Houston, TX 77079.

Dr. Jose Antonio Robles passed away peacefully surrounded by family at Memorial Hermann Hospital in Houston, TX on May 21, 2016 at 11:13 am. Born in Manila, Philippines on September 20, 1945, the eldest son of seven to Tito Robles and Soledad... View Obituary & Service Information

The family of Jose Antonio Robles, M.D. created this Life Tributes page to make it easy to share your memories.

Send flowers to the Robles family.