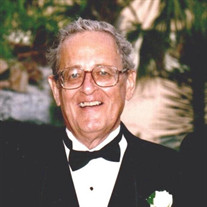 Joseph (Joe) Edward Collins Sr., age 93 of Houston, Texas passed away peacefully surrounded by his loving family on November 17, 2021. Joseph was born on February 16, 1928 in Mount Savage, MD. He was the son of Angela Farrell and John Anthony Collins. He is prececeded in death by his parents, his devoted wife Bertha of 72 years marriage; and his son Joseph Edward Collins, Jr. Joseph is survived by his son John A. Collins; daughter Jeanne T. Wallace & husband Kevin Barker; grandchildren. Kara Trista Wallace, Caleb S. Collins, Bryson C. Wallace and Samantha B. Collins; he is also survived by 6 great-grandchildren and his brothers James Collins, Johnny Collins and Michael Collins. Joseph, also known as Eddie in his youth, grew up in Mount Savage and Cumberland, Md., where he graduated from La Salle High School and promptly enlisted in the Army Air Corp. that subsequently transitioned to become the United States Air Force. He met the love of his life, Bertha, in June 1948 at Shaw Air Force Base in Sumpter, South Carolina. The couple were married in El Paso, TX on April 24, 1949. Joseph retired from the Air Force in 1968 after attaining the rank of Chief Master Sergeant with 20 years’ service specializing in computer programming. He then worked as a computer programmer for RCA, then on to Sperry Univac which subsequently became Unisys Corporation. He was well known at Unisys as an adept and reliable programming trouble-shooter for major projects until he retired after 20 years. Joseph was a good, decent, and modest man of exceptional humility. He reminded us always of the true meaning of family, and his most precious gift to each of us was his unconditional love and support. As a tireless supporter and generous benefactor to Bertha and his extended family, he helped countless family members in their time of need and always put other peoples needs before his own. Joseph’s kind and considerate spirit will live on in the hearts of anyone who knew him and he will be greatly missed. Joseph’s life was centered around God and family, and the many pet dogs treasured over the years. He and Bertha were faithful members of St. John Vianney Catholic Church for the past 36 years. He was a lucky man in every way, always guiding others and devoted to supporting his family. He also provided wise counsel to many young people on life and career, and his impact is a testament to the power of kindness, love and respect for hard work. His generous and compassionate spirit was evidenced by the loving care he provided throughout the years for his immediate and extended family members. Joseph will be sorely missed by his beloved family and many devoted friends made through the years in service to his community, his country and his God. The Collins family will be present to receive friends and family on Sunday, November 28, 2021 from 2:00 PM until 4:00 PM with a Holy Rosary recited at 3:00 PM at Dettling Funeral Home, 14094 Memorial Dr., Houston, TX 77079. The Funeral Mass will be celebrated Monday, November 29, 2021 at 10:30 AM at St. John Vianney Catholic Church, 625 Nottingham Oaks Trail, Houston, TX 77079. The Funeral Mass will be live streamed at this link: https://youtu.be/-le6pETlByQ. Joseph will be laid to rest alongside his wife Bertha at VA Houston National Cemetery in a private family ceremony. “Eternal rest grant unto Joseph, O Lord, and may perpetual light shine upon him, and all the souls of all the faithful departed, and may he Rest In Peace in God’s Mercy. Amen” .

Joseph (Joe) Edward Collins Sr., age 93 of Houston, Texas passed away peacefully surrounded by his loving family on November 17, 2021. Joseph was born on February 16, 1928 in Mount Savage, MD. He was the son of Angela Farrell and John Anthony... View Obituary & Service Information

Send flowers to the Collins family.