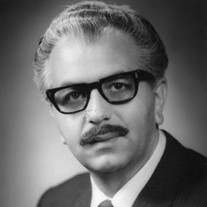 He who dwells in the shelter of the Most High will rest in the shadow of the Almighty. I will say to the Lord, “He is my refuge and my fortress, My God, in whom I trust” Psalm 91:1-2. Joseph H. Giries, loving husband and father, entered the Kingdom of Heaven on Wednesday, November 1, 2017 surrounded by loved ones. Joseph lived 94 full years and is now peacefully back in the arms of his beloved parents, Hanna Giries and Marguerite Rock Giries, his Aunt Maria Giries, his brother George Giries, his sister Georgette Giries and all those friends and family who have passed before him. Born in the village of Ein Karem, just outside Jerusalem, Palestine, on December 1, 1922, Joseph was the second of eight children. He is survived by his wife, Emily Palacios Giries, daughter Juliet Giries Brandon and husband Stephen, sons, Joseph Hanna Giries, Jr. and John Michael Giries, brothers, David Giries and wife Leila (Los Angeles), Elias Giries, Sr. and wife Ruth (Houston) and sisters, Evelyn Giries Sirrieh (Houston), Elizabeth Giries Misri (Houston), Lily Giries Farris and husband, Eddie (Los Angeles) and 22 nieces and nephews. Joseph adored his upbringing in the birthplace of St. John the Baptist and often shared stories of his experiences living in the Holy Land. Educated by the Franciscan Fathers, he loved helping them make their wine as much as he enjoyed playing soccer. A standout as the tallest kid in the village, he ran everywhere he went, never just walked. He and his siblings spent many hours working on their vineyards and orchard trees with their Aunt Maria. Joseph learned photography from his cousin Yusef Shamieh and would go on to work for Matson Photo Service as an Apprentice. Today dozens of the historical images he took depicting Palestine (present day Israel and the West Bank) through 1946 are part of the Matson (G. Eric and Edith) Photograph Collection in The Library of Congress. During the 1948 conflict between Israelis and Palestinians, he and his family were displaced and lost their land. Joseph planned to move to London, the birthplace of his mother, but his father advised him to go to America to live with his uncle in Houston. His favorite cousin, Madeleine Talamas of New York became his sponsor when he emigrated in 1950. As a student sharing an apartment with 4 other students, Joseph shared his creativity and passion for cooking all the wonderful Middle Eastern dishes he learned from his mother. Upon graduating from University of Houston he went to work for Gene Farren who owned Photocolor of Houston, Inc. Eventually he became partners in the company and in 1970, he and his wife Emily bought Gene’s share of the business when he retired. During this same time he opened a restaurant with his brothers called The Arabian Nights, the first Arabic restaurant in Houston. Joseph had an extraordinarily generous nature, always eager to assist anywhere he could. He sent money home to those who needed it, sponsored many to emigrate to America, purchased a home for his parents and his sons. Once he retired, Joseph spent a lot of time in his Colorado home doing those things that he loved, photographing landscapes and cooking for family and friends. The family will receive friends Tuesday, November 7th, 2017 from 6:00pm to 8:00pm with a Vigil beginning at 7:00pm at Dettling Funeral Home, 14094 Memorial Drive, Houston TX 77079. The Funeral Mass will be celebrated on Wednesday, November 8, 2017, at 10:30am at St. Cecilia’s Catholic Church, 11720 Joan of Arc Drive, Houston TX 77024, with a reception following immediately in the Community Center. The family expresses its deepest gratitude to Drs. Jasmin Baleva, Cora Mihu, Matthew Spinn and Anil Thaker. Memorial donations can be made to St. Cecilia Catholic Church or the Religious of the Sacred Heart at Duchesne Academy.

He who dwells in the shelter of the Most High will rest in the shadow of the Almighty. I will say to the Lord, &#8220;He is my refuge and my fortress, My God, in whom I trust&#8221; Psalm 91:1-2. Joseph H. Giries, loving husband and father,... View Obituary & Service Information

The family of Joseph H. Giries Sr. created this Life Tributes page to make it easy to share your memories.

He who dwells in the shelter of the Most High will rest in the...

Send flowers to the Giries family.