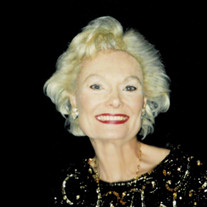 Mrs. Judith Doris Klinetob, age 88, of Houston, TX, peacefully ascended to Heaven to reunite with her beloved husband Darwin on Wednesday August 18th, 2021. “Judy”, as she was known by her countless friends throughout her long, happy life was born in Madison, WI on September 13th, 1932. Soon thereafter, her parents, Herbert and Doris Naujoks moved to Wilmette, IL on the North Shore of Chicago where her father (BA ’24, BL ‘25, MD ’29 from WI & JD from Yale ’30) became a highly prominent attorney. As the first of her parent’s three daughters, she gladly embraced the roll of natural born “cheerleader of the pack” to her younger sisters Nancy and Gracia. As such, she quickly developed the extraordinary confidence and enthusiasm which came to be her Hallmark. It is truly no exaggeration to say that “shy or hesitant” were entirely foreign concepts to her, even as a young child. Her remarkable beauty and magnetic charm were evident from the moment that she “burst on the scene” in grade school. She immediately caught the attention of teachers, classmates, and the boys in particular. It’s not at all surprising that her first childhood boyfriend was none other than Donald Rumsfeld who regularly carried her books as he walked her home from school. While unforeseen then, not only would “Don” go on to become U. S. Chief of Staff as well as Secretary of Defense, the two remained close friends in high school and beyond at many reunions for decades to follow. To no one’s surprise, she continued to “light up the room” throughout her years as an officer of her student body class at New Trier High School in Winnetka, IL. She went on to attend Michigan State and later Northwestern University where she earned her degree. On one particular evening in her senior year at Northwestern, she attended a seminar at her church which was to become the place and moment in time she would meet the love of her life: Darwin Klinetob. After only their second date, her “husband to be” raced home where he wrote and actually mailed himself a “registered letter” proclaiming Judith D. Naujoks to be THE girl he would marry. Precisely one year from that special night, he gave her that very letter, an engagement ring and asked her to marry him. In 1953, they were married in the church directly across the street from the church in which they met. Thus began the marriage which would span nearly SIXTY years. In addition to being a loving wife and wonderful mother to her children, Marci and Chris, Judy achieved successful careers in both the airline and real estate industries. She and Darwin shared a love of travel which was truly extraordinary. In fact, they flew over 100,000 air miles together in their very first year of marriage and that was just the beginning of what became their number one favorite pastime bar none. Trips to South America, Cuba and The Bermuda Islands were just a few of the spectacular destinations they enjoyed before the children were born. As a family, they continued to enjoy numerous trips across the US and abroad with Europe being their number one destination. Throughout their many years in retirement, the trips became even more frequent and extended. They became avid cruise connoisseurs on cruise lines including Norwegian, Royal Caribbean and Princess. In total, they traveled to Europe an unbelievable 16 times together. Having lived a long and blessed life of nearly 89 years, she is survived by her daughter: Marcia Lynne, son-in-law: Gary Pekala, son: Darwin Christopher, sister: Gracia, loving brother-in law: Doug Ward, their sons: Tim, Greg and Stephen, and nephews: Scott and Jeff Fischer. A Memorial Service celebrating Judith's life will be held Wednesday, September 8, 2021 at 2:00 PM at Memorial Drive United Methodist Church, 12955 Memorial Drive, Houston, TX 77079. The Memorial Service will be live streamed at www.mdumc.org/klinetob

Mrs. Judith Doris Klinetob, age 88, of Houston, TX, peacefully ascended to Heaven to reunite with her beloved husband Darwin on Wednesday August 18th, 2021. &#8220;Judy&#8221;, as she was known by her countless friends throughout her long,... View Obituary & Service Information

The family of Judith Doris Klinetob created this Life Tributes page to make it easy to share your memories.

Send flowers to the Klinetob family.