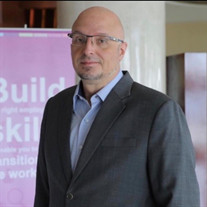 Kevin Andrew Estis, 47, passed away March 12, 2021. Most recently of Tallinn, Estonia, Kevin previously resided in the United Arab Emirates, Northern Virginia, Texas, and Louisiana. Funeral services will be held on April 17, 2021 at 2pm at Dettling Funeral Home along with visitation. A graveside service for family will be held on April 20, 2021 at 2pm at Heard Cemetery in Manifest, Louisiana. Kevin was born in Louisiana on November 20, 1973. He attended Langham Creek High School and continued on to receive both Bachelor’s and Master’s degrees from Sam Houston State University. Kevin was married to Sheila Prater Estis on December 29, 2000; they were married for 20 years. Kevin worked in Information Security in locations across the globe and participated in numerous professional conferences, including Defcon, for fifteen years. Kevin was a long time Security Goon at Defcon for 15 years. Retiring in 2015 and one of the first to receive a gold badge. He was very proud to be a member of the Goon Community. During his career, Kevin sought to encourage others to excel in the field of technology. Friends noted that “he was always eager to lend a hand to anyone that needed it and put them ahead.” He enjoyed teaching his children to use his prized smoker, gardening, cooking, fast cars, good food and spending time with family and friends - especially at a backyard barbeque. Making his home overseas the last eight years kindled an appreciation for other cultures, travel, and Kevin appreciated the opportunity to show his family the world. Kevin is survived by wife Sheila Estis; children Jack, Will, Sarah, and Mathew; mother Leslie John Estis Thompson; brother Donald Patrick Estis and sister-in-law Valerie Estis; along with numerous nieces, nephews and other extended family. Kevin is preceded in death by father Jarrell Wayne Estis, brothers Jarrell Wayne Estis Jr. and William Russel Estis, and his grandparents.

The link for steaming services on Saturday, April 17, 2021 beginning at 2:00 PM is https://youtu.be/b2bJRRwOTVY

Send flowers to the Estis family.