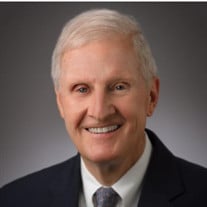 Larry Bell, 71, of Houston, passed away Wednesday, February 27, 2019. Larry was born September 15, 1947 in Shreveport, LA to Ed and Fern Bell. He is survived by his wife of 48 years, Diane Bell; children, Jason Bell & wife Carolina, Kelly “KB” Bell; grandchildren, Nathan and Andrew Bell; and sister Kathy Mayhall & husband Carl as well as nieces, nephews, cousins, extended family and dear friends. Larry grew up in Ada, Oklahoma. He attended the University of Oklahoma where he met the love of his life, Diane. Larry joined Sigma Alpha Epsilon and made friendships that were maintained his whole life. He graduated with an accounting degree and in 1969 went to work for Arthur Anderson in Houston. He married Diane in 1970 and later began a career in the oil and gas industry. He spent the reminder of his life in Houston where he raised his family. Larry loved playing golf with his many friends and was a long-time member of Pine Forest Country Club. He worked at Holly Frontier for almost 20 years and was a board member for Adams Resources. When not on the golf course he was an avid reader who loved spending time with his children and grandchildren. He lived by “The True Gentleman’s Code”, was loved by those who knew him and will be greatly missed. The Bell family will be present to receive friends Thursday, March 7, 2019 from 6:00 PM until 8:00 PM with a Vigil Service beginning at 7:00 PM at Dettling Funeral Home, 14094 Memorial Dr., Houston, TX 77079. The Funeral Mass will commence Friday, March 8, 2019 at 10:30 AM at St. John Vianney Catholic Church, 625 Nottingham Oaks Trail, Houston, TX 77079. A reception will follow Holy Mass on the church campus. In lieu of flowers please consider contributions in Larry's memory to the Juvenile Diabetes Research Foundation (JDRF Memory Donation).

The family of Larry Bell created this Life Tributes page to make it easy to share your memories.

Send flowers to the Bell family.