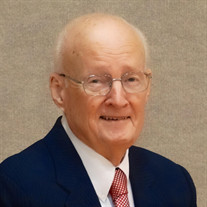 Larry Logewynn Jerden, age 86, passed away peacefully on September 13, 2019 in Houston, Texas. Larry was born August 9, 1933, in Longview, Texas to Ody L. Jerden and Elsye Nora (Byars) Jerden and was raised by Elsye & her husband, Tomy T. Jerden. Larry lived most of his life in Houston and was a graduate of Milby High School in 1953. He was drafted into the United States Army and served as a Private First Class from 1953-1955. After meeting and marrying Reba Lois Powers in 1956, Larry attended the University of Houston before deciding to pursue a career as an officer with the Houston Police Department. He proudly served his community for 23 years from 1958-1981. During his retirement years, Larry helped with the family business and drove the bus for handicap students in the Alief Independent School District. Larry was a devoted family man and faithful follower of Christ. Larry served the Lord by working in the church for much of his life, including serving as a deacon and singing in the choir in many of the churches he and Reba attended. They helped to start new churches in the Houston area, including Brentwood Baptist, First Baptist Alief and West Oaks Baptist. More recently, Larry and his family attended Tallowood Baptist Church. Larry had a passion for loving and supporting individuals with disabilities. In recent years, he enjoyed spending time volunteering at The Brookwood Community. He also had a hobby of reading and a love for learning new things. Larry is survived by his loving wife of 63 years, Reba Jerden; sons Wayne Jerden and Craig Jerden and wife Susan, and twin granddaughters Kelly Jerden and Lauren Jerden. Larry was predeceased by his parents and younger brother Ody K. Jerden. A memorial service will be held Friday, September 20, 2019 at 1:00PM at Tallowood Baptist Church, 555 Tallowood Road, Houston, Texas 77024. The family will receive visitors at a reception following the service. Larry will be laid to rest at Houston National Cemetery, 10410 Veterans Memorial Dr, Houston TX 77038, in a private family burial on Friday morning. In lieu of flowers, please consider a donation in Larry’s memory to The Brookwood Community 1752 FM 1489, Brookshire, TX 77423 or www.brookwoodcommunity.org or a charity of your choice.

The family of Larry Logewynn Jerden created this Life Tributes page to make it easy to share your memories.

Send flowers to the Jerden family.