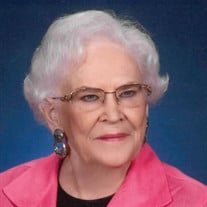 Leona Malmstrom Franklin, 96, of Houston passed away peacefully on Friday, April 2, 2021. Mrs. Franklin was born December 29, 1924 in Melvin, Texas to Oscar Daniel Malmstrom and Hulda Johnson Malmstrom. She is preceded in death by her parents, her two older sisters, Lillian Johnson and Eloise Johnson, and her husband, Thomas J. Franklin. Leona is survived by her son, Dr. Daniel J. Franklin and wife, Kimberly, and her daughter, Susan Crosley and husband, John. She is also survived by her grandchildren, Matthew Franklin and wife, Mary Katherine; Nicholas Franklin and wife, Laura Franklin; Allison Franklin, Jay Crosley and Thomas Crosley and great grandchildren, Warner Franklin and Kennedy Franklin. Leona was born the grandchild of Swedish immigrants on a farm near the small town of Melvin, Texas. Her father died unexpectedly when she was 7 and the family eventually moved to Austin. She started college at Southwest Texas State University and then transferred to The University of Texas at Austin. She landed a job as legal secretary in the firm of Patterson and Patterson and the firm encouraged her to attend The University of Texas Law School. She was admitted to the bar in 1950 and was successfully practicing law when she met and married the love of her life, Thomas Jennings Franklin. Pursuing a business opportunity, the couple relocated to Victoria, Texas. While there, she was appointed Victoria’s first female municipal court judge. Subsequently, the family settled in Houston where she continued to practice law and ultimately retired from the Office of the Harris County Attorney. The Franklin family will be present to receive friends Tuesday, April 20, 2021 from 6:00 PM until 8:00 PM at Dettling Funeral Home, 14094 Memorial Dr., Houston, TX 77079. Funeral services for Mrs. Franklin will be held Wednesday, April 21, 2021 at 10:00 AM at Holy Spirit Episcopal Church, 12535 Perthshire Rd., Houston, TX 77024. Leona will be laid to rest next to her husband in Austin Memorial Park in a private family ceremony.

Leona Malmstrom Franklin, 96, of Houston passed away peacefully on Friday, April 2, 2021. Mrs. Franklin was born December 29, 1924 in Melvin, Texas to Oscar Daniel Malmstrom and Hulda Johnson Malmstrom. She is preceded in death by her parents,... View Obituary & Service Information

The family of Leona Malmstrom Franklin created this Life Tributes page to make it easy to share your memories.

Send flowers to the Franklin family.