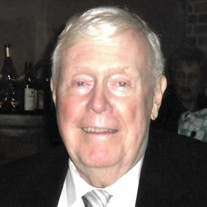 Having battled prostate cancer, Parkinson’s, Dementia and Polyneuropathy, Leonard died peacefully in Park Manor Westchase in Houston at 83 years old. Len leaves his loving wife of 56 years, Joan, and their three children and seven grandchildren: Cathy and Trey Campbell and sons Jackson and Dillon from Utah; Carol (Murphy) Kiburz and children Sarah and P.J. from Dallas; and Christopher and Shannon Carr and children Will, Clara and Christian, also from Dallas. Len’s sister-in-law, Cecelia Carr, her son William G. Carr, Jr., and two daughters Cecelia St. Clair and Patricia Rodrigues, with families, also survive him. Leonard grew up in Bayonne, NJ with parents Mildred Delaney Carr and William M. Carr and his brother William G. Carr, Sr. who have predeceased him. After attending Bayonne High School in New Jersey, Len graduated from Seton Hall University in 1954. He entered the US Army in Fort Dix, NJ, and served in the Military Intelligence Unit of the First Logistical Command in Fort Bragg, NC from 1954 to 1956. He was honorably discharged in 1962. Len received his MBA from Seton Hall University that same year. Len’s career was in the food business. He started out in the advertising department of Acme Supermarkets in Newark, New Jersey where he met and married his wife Joan, a summer employee. Len and his family moved to Cleveland, Ohio where he was a product manager with Durkee Famous Foods, and was instrumental in marketing O & C Onions (now French’s). The Carrs returned to New Jersey in 1967 when Len was promoted to Assistant General Manager of the Reeves division in Brooklyn NY, marketing olives and olive oil. In 1972, the family reached its final location in Houston where Len was employed by Riviana Foods. Len then traveled to Spain, Portugal and Norway as President of Carexport Company for Carbonell Olives of Spain. Len later incorporated Three C Enterprises, and owned it from 1983 to 1992. He sold drink machines, wine and cookies in later years. A gourmet chef, Len enjoyed preparing delicious meals for family and friends. For five years he was a proud member of a winning chili cook-off team that raised money for the Cenacle Retreat House. A longtime member of St. John Vianney Parish, he prepared dinners over a two-year period with a group from the Men’s Club for monthly meetings, and served iced tea at the Church Bazaar for many years. While courting Joan, Len drove a red MGA and, in later years, he and his son Chris purchased a green one. Len and Joan were active members of the Houston MG Car Club and enjoyed many fun events, weekends in Salado and two cruises with this lively group. Len served in executive positions and organized Christmas parties, anniversary parties and hosted international dinners at home for the Club. In hat, sunglasses and long-sleeved shirt, Len captained the family’s motorboats for 30 years. He also enjoyed beach vacations and Mexican resorts. Until the last few years, he played golf, was a member of theater and dinner groups, played bridge and looked forward to Thursday lunches with the guys. Joan and Len traveled to many states visiting family and friends. The Gipsy Kings, flamenco artists, were his favorite music group, and he and Joan followed them to Dallas and Austin as well as Houston venues. After falling and fracturing his wrist walking into their concert, Len refused an ambulance ride so he wouldn’t miss his beloved band. An avid sports fan, Len helped to coach Chris’ teams, and had season tickets to the original Houston Aeros hockey team, A&M football games for 4 years, and the Houston Rockets. The family wishes to thank the staff members of Park Manor Westchase and Vantage Hospice who were so kind and caring during the last few months of Len’s life. Our many friends have been an unbelievable support system, and words cannot express our gratitude to them. Visitation will be held from 6 until 8 p.m. at Dettling Funeral Home, 14094 Memorial Drive, Houston, TX 77079 on Tuesday, August 16, 2016. The Funeral Mass will be celebrated in the Activity Center of St. John Vianney Catholic Church, 625 Nottingham Oaks Trail, Houston, TX 77079 at 10:30 a.m. on Wednesday, August 17, 2016. A reception will follow on the church campus. Following the reception, Len will be buried at Veterans Memorial Cemetery, 10410 Veterans Memorial Dr., Houston, TX 77038. In lieu of flowers, please consider a donation to your favorite charity.

The family of Leonard William Carr created this Life Tributes page to make it easy to share your memories.