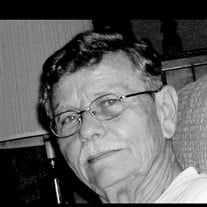 Lloyd Fay Cobb, age 84, passed away peacefully Wednesday, December 19, 2018 in Houston, TX. Lloyd was born in Kansas City, Kansas on February 3, 1934 to Nelle Evelyn (Adams) and Loyd Stephen Cobb. Lloyd attended school in Kansas City, Kansas. He enlisted in the U. S. Navy in 1951 and served aboard the USS LST 516 as a motorboat operator. After his discharge from the Navy, Lloyd returned to Kansas City, Kansas. He later became a warehouse manager for Parker Hannefin in Houston, TX. He retired in 1996. During his military service he continued his friendship with Betty Angeline Dyche, born May 19, 1935; a childhood friend. They attended the same Junior High school. During Lloyd’s enlistment in the U. S. Navy, and after several furlough trips back home; he and Betty corresponded and dated; and were married on May 27, 1955. They were man and wife until his passing in 2018; 63 wonderful years. Lloyd was an active person. He threw newspapers in K.C.K. when he was a young teen. He challenged himself to “hit the porch” EVERYTIME. He was energetic, enthusiastic and optimistic. Lloyd had a “can-do” attitude. He was prepared to tackle any task. He was a “shade-tree mechanic “. He participated in the Golden Gloves boxing program in his mid-teens. He was a gymnast in High School and loved watching football and listening to the Indianapolis 500 car race on the radio. Lloyd is survived by his wife, Betty; his sons, Matthew Steven Cobb, of Salt Lake City (wife: Nadia Miniclier Cobb) and their children Ian Matthew; and Andrew Carver, of SLC, UT, and his son Jeffrey Carl Cobb (wife: Nancy Chandler) and Nancy’s son, Christopher Chandler (wife: Michelle) and their two children, Isabelle and Rhys. Lloyd is also survived by his brothers David Cobb (wife Karen) and their five children and families; and his brother Douglas Cobb (wife Brenda) and their daughter. He was a peaceful man who enjoyed life; starting each day with his instinctive gift of positive thinking. His favorite song was “Look for the Silver Lining”. A Memorial Service celebrating Lloyd's life will be held Friday, February 1, 2019 at 10:00 AM at Dettling Funeral Home, 14094 Memorial Drive, Houston, TX 77079. A reception will follow services in the Grand Room of the funeral home. Lloyd will be laid to rest in VA Houston National Cemetery following the reception. In lieu of flowers, donations in the form of gift cards can be sent to the caring staff of Autumn Leaves Memorial City Memory Care, located at 1725 Eldridge Parkway, Houston, TX 77077, for their loving care; or your preferred charity.

The family of Lloyd Fay Cobb created this Life Tributes page to make it easy to share your memories.

Send flowers to the Cobb family.