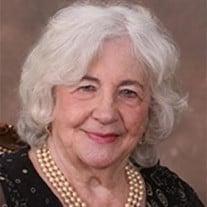 Our beloved Mother, Lois Massaro, passed away peacefully in the early morning hours of April 3, 2017. She was born in Manchester, Oklahoma, November 20, 1931, the eldest child of Lawrence Lanie and Eleanor Stevenson Lanie. Lois was educated at Saints Peter and Paul Catholic Grade School and graduated from Manchester High School in 1949, where she was honored as Valedictorian. Upon graduation, she attended Benedictine Heights College in Guthrie, Oklahoma for one year and then continued her studies earning a degree in Commercial Arts at Northern Oklahoma College, Tonkawa. Upon completion of her degree, Lois was employed as a secretary by Continental Oil Company, (Conoco), in Ponca City, Oklahoma. While working at Conoco, Lois met her future husband, Virgil James Massaro. They were introduced to each other by her cousin, Colleen Lanie (Schiltz), and Virgil's longtime friend, Leonard Dominic. Lois and Virgil were joyously married at St. Joseph's Roman Catholic Church in Blackwell, Oklahoma on April 24, 1954. Lois and Virgil settled in Ponca City, where they were blessed with a family of four children. Lois was a loving wife and devoted Mother. The family moved five times following Virgil's career: first to Denver, Colorado; then to Houston, Texas; then returning to Ponca City a second time; followed by a move to Pittsburgh, Pennsylvania. Ultimately the family settled permanently in Houston, where Lois and Virgil lived on Rancho Bauer Drive for 36 years from 1979 to 2015. During that time they were active members of St. John Vianney Parish. In 1964, Lois began the study of Art and Art History, which was her lifelong passion. She became an accomplished artist and her many paintings and drawings leave a wonderful family legacy. She completed her final painting in October of 2016 while visiting Kauai. After becoming a widow in 2015, Lois devoted her time to her children and their extended families. She enjoyed painting, gardening, and the lively companionship of her grandchildren and great grandchildren. She will be greatly missed. Lois is survived by her four children and their spouses, James and Susan Massaro of Kalaheo, Kauai; Julian and Cecile Bott of Austin, Texas; Peter and Jan Massaro of Portland, Oregon; and Lawrence and Kamela Massaro of The Woodlands, Texas; and nine grandchildren and six great grandchildren. She is also survived by her two devoted sisters: Lauree Carriger of Parkville, Missouri and Joyce Wooldridge of Austin, Texas. A Funeral Mass will be celebrated Saturday April 8, 2017 at 1:30 pm in St. Helen's Roman Catholic Church, 2700 East University Avenue, Georgetown, Texas 78626. Interment will follow at 4:30 pm at Our Lady of the Rosary Cemetery, 330 Berry Lane, Georgetown, Texas 78626.

Our beloved Mother, Lois Massaro, passed away peacefully in the early morning hours of April 3, 2017. She was born in Manchester, Oklahoma, November 20, 1931, the eldest child of Lawrence Lanie and Eleanor Stevenson Lanie. Lois was educated... View Obituary & Service Information

The family of Lois Massaro created this Life Tributes page to make it easy to share your memories.

Our beloved Mother, Lois Massaro, passed away peacefully in the...

Send flowers to the Massaro family.