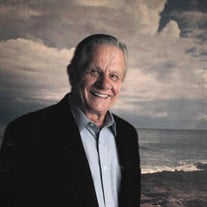 Loius James Yelich, age 92, born and raised in Ironwood, MI, current resident of Richmond, Texas, passed away at home on August 12, 2020. Devoted and loving husband of 68 yrs. to Barbara DenDooven Yelich. Lou loved God, loved his family and loved his country. He was a man of strong convictions, a skillful orator, and enjoyed an intellectual debate. Lou was a self-reliant, self-taught man who enjoyed learning and sharing his opinions and talents with everyone. He graduated from the University of Minnesota, School of Business in 1954. He was an Air Force Veteran who served in both WWII and the Korean War. Lou was an entrepreneur and talented businessman, a 53 year member of the Houston Downtown Rotary Club, and an active supporter of the University of Minnesota Alumni Association. Preceded in death by parents, Louis and Ann Yelich, sisters, Mary Yelich, Ann (Bruce) MacVicar, Bernice Yelich, and brother, John Robert Yelich. Survived by sister Veronica (Mike) Uzelac, and children Lou (Lana) Yelich, Ann (Rick) Candea, Mary (Tom) Ball, Tom (Maureen) Yelich, ten grandchildren and six great-grandchildren. Funeral Mass will be held Monday, August 17, 2020, 10:30am at St. John Vianney Catholic Church, 625 Nottingham Oaks Trail, Houston, TX 77079. Lou will be laid to rest in his home town of Ironwood MI. at a later date. Charitable contributions in Lou’s memory can be made to Homes for Our Troops, www.hfotusa.org, Cal Farley’s Boys Ranch, www.calfarley.org., or a charity of your choice.

The family of Louis James Yelich created this Life Tributes page to make it easy to share your memories.

Send flowers to the Yelich family.