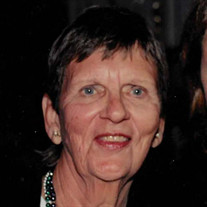 Louise Moran, born to George and Helen Coffey Stepat on Oct. 12, 1929 in New York, New York, died peacefully, surrounded by family, on August 6, 2016. She was raised by her warm and loving mother and stepfather, William H. Craig. Her early years were spent in New York City, where she attended Cathedral High School. She went on to graduate from St. Vincent’s School of Nursing and continued to reside in Manhattan, serving as a surgical nurse at New York Hospital. Her next career as a flight attendant for Pan American Airlines took her to the far corners of the world. After moving to Houston and taking time to raise her family, Ms. Moran returned to her nursing career, working as a nurse in several cities and at both St. Luke’s Hospital and Rosewood Hospital in Houston. She had rotations in the Emergency Room, the Neonatal Unit, and Nursing Administration. After retirement, she continued her work in the medical field as a volunteer at Memorial City Hospital and Houston Hospice. In addition to Louise’s charity work, she was a willing volunteer at her children’s schools. She was also a devout Catholic at St. John Vianney, happily devoting time to various committees at her church. Her primary interests included gardening, reading and playing cards. Louise was an avid bridge player who played in multiple bridge groups and treasured her weekly games with dear friends. Her love of learning continued into her golden years, as she learned how to use an iPad, took various dance classes and was always up for learning a new game. Ms. Moran was preceded in death by her parents, her children’s father, Thomas M. Moran, by her nieces Elyn O’Connell and Susan Dratch. Her faithful and loving dog, Fiona, died just days after Louise entered the hospital for her final days. Ms. Moran is survived by her four children, Dona and husband, Brad Hippert; Thomas Jr. and wife, Anthea, and grandson, Luke; Robert and wife, Sunny, and grandsons, Brendan and Xiangrui; John and wife, Patty, and granddaughter, Annie. Her sister, Helen Quigley, and her nieces and nephew, Patti, Sally, and Tommy Quigley, along with their families, also survive her. A visitation will be held at Dettling Funeral Home, 14094 Memorial Drive, Houston, TX 77079 between 6 and 8 PM on Thursday August 11, 2016 . A funeral mass will be held at St. John Vianney Catholic Church, 625 Nottingham Oaks Trail, Houston, TX 77079 on Friday August 12, 2016 at 10:30 AM. In lieu of flowers, please consider a donation to Houston Hospice.

Louise Moran, born to George and Helen Coffey Stepat on Oct. 12, 1929 in New York, New York, died peacefully, surrounded by family, on August 6, 2016. She was raised by her warm and loving mother and stepfather, William H. Craig. Her early... View Obituary & Service Information

The family of Louise Moran created this Life Tributes page to make it easy to share your memories.

Send flowers to the Moran family.