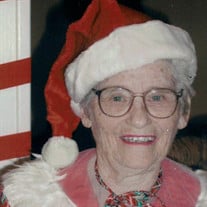 Mae E. Malone passed away on October 7, 2017 after a nearly 95 year life of service to others, healing, spirituality and joy. Born in New York City on October 19, 1922, Houston has been Mae’s home since 1969. Mae gave selflessly to her adopted city as a beloved and unforgettable volunteer in nursing homes, hospices and hospitals, tirelessly bringing comfort and kindness to many, especially those who had no one else. Well into her eighties she shared her joy in life by playing Santa Clause and the Easter Bunny at countless events for the children of Houston, including eight years as a Santa Clause at the George R. Brown Convention Center Christmas festivities. For years she sent small Christmas gifts to scores of less fortunate children she had met. As a young woman, her love of service to others and of healing was realized as a nurse. She applied her intelligence, determination, nursing skills and knowledge to a personal battle with hypoglycemia by researching the disease at a time when it was not well understood by many in the medical community and in a pre-internet era when medical research was a daunting task. Armed with that research, Mae helped to sooth the suffering of thousands by founding both the El Paso and Houston Hypoglycemia Societies. Later, faced with a rare muscle disease for which there was no known treatment, she immersed herself in the physical, mental and spiritual pathways of alternative healing. After her triumph over that disease, she dedicated her life to sharing her knowledge of those pathways with those in need and to volunteering untold hours supporting other practitioners of those pathways. In the process she became an icon of the Houston alternative health community. Mae took great joy in her life as a wife, mother and grandmother, a joy that her family cherishes. She was preceded in death by her beloved husband of 50 years, Jack. She is survived by her children, Bob Malone and Maureen Davidson, her grandchildren, Michael Malone, Carlie Malone, Terri Interrante and Jerry Davidson Jr., her daughter-in-law, Joan Malone and her son-in-law, Jerry Davidson. A celebration of Mae’s life will be held at Dettling Funeral Home at 2:00 P.M. on Saturday, October 28, 2017, with a reception following the services. The family has asked that in lieu of flowers donations be made to the Juvenile Diabetes Research Foundation, or to Samaritan’s Purse.

Mae E. Malone passed away on October 7, 2017 after a nearly 95 year life of service to others, healing, spirituality and joy. Born in New York City on October 19, 1922, Houston has been Mae&#8217;s home since 1969. Mae gave selflessly to her... View Obituary & Service Information

The family of Mae E. Malone created this Life Tributes page to make it easy to share your memories.

Send flowers to the Malone family.