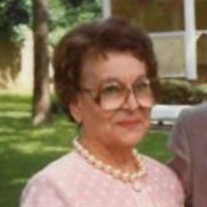 Marceil McLain Smith was born to Jesse Franklin McLain and Annie Peterson McLain on October 17, 1922 in Appleby, Texas. She grew up in Appleby with two sisters and one brother, and graduated from Nacogdoches High School in 1939. In 1942, she married James Dale Smith, a Texas A&M student and son of James Homer and Pearl Smith of nearby Timpson, Texas. During the war, the young couple moved to Center for Dale’s work, and in 1946 they were blessed with their first daughter, Suzanne. In 1954, their younger daughter Karen Dale was born in Carthage. Shortly after Karen’s birth, the family moved to Houston, which would become their permanent home. Dale began a long career with the Houston Post newspaper, and Marceil devoted herself to her two daughters and her home. Whether as a young woman, a sister, a daughter, or a wife or a mother, she was always taking care of others, with little regard for her own needs or wishes. Her mother and sister were legally blind due to a congenital disease, and Marceil was the one on whom they depended. She cared for her husband throughout their 65 years of marriage, demonstrated selfless love to her daughters, and lived with and cared for Karen until her own health began to fail several years ago. She was a faithful Christian, and member of a number of Baptist churches in the Houston area, most recently Heritage Baptist Church in Missouri City. In her later years, she discovered the joy of painting. Dale built an easel for her, Suzanne bought art supplies for her, and Marceil proved to be a gifted artist, creating beautiful scenes of her beloved East Texas countryside. Marceil passed away peacefully at The Forum at Memorial Woods, where she had lived for the last few years, just one month shy of her 99th birthday. She was predeceased by her parents; her siblings Tommie Proctor, Jesse McLain, and JoAnn Martin; her husband James Dale Smith; her daughter, Suzanne Smith Kramer; parents-in-law Homer and Pearl Smith; brother-and sisters-in-law Ray Smith, Bess Smith, Marcelle Smith Cowart, and Joy Smith Davis; nephew Charles McLain; and niece Mary Cowart Burke. Marceil is survived by her daughter Karen Dale Smith; nieces and nephews Judy Robinson, Debbie Gray, Cathy Gilmore, Jan Davis Pickle, Ed Cowart, Kathy Cowart Hall, Jim Davis, John Davis, Rob Smith, and K Smith Leonard; son-in-law Matt Kramer; and numerous great-nieces and great-nephews. A family graveside service will be held on Saturday, September 18 at 2:30 p.m. at Sunset Memorial Park cemetery, 5127 North Boulevard, Nacogdoches, Texas.

Marceil McLain Smith was born to Jesse Franklin McLain and Annie Peterson McLain on October 17, 1922 in Appleby, Texas. She grew up in Appleby with two sisters and one brother, and graduated from Nacogdoches High School in 1939. In 1942, she... View Obituary & Service Information

The family of Marceil McLain Smith created this Life Tributes page to make it easy to share your memories.

Send flowers to the Smith family.