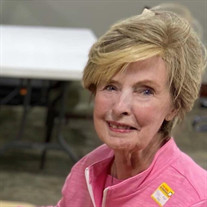 Marianna “Pudden” Snowden Gray went to be with the Lord on Monday, August 30, 2021 in Katy, Texas. She was born in Beaumont, Texas on January 30, 1940 to the late Robert Howard Snowden, Jr. and Anna Olivia Curlee Snowden. She was also preceded in death by her beloved brother Robert Howard Snowden III. She moved to Paris, Texas in 1945 where she graduated from Paris High School in 1957. Her life in both Beaumont and Paris brought her many lifelong friends. Marianna attended Auburn University and was a passionate lifelong fan of her Tigers, “War Eagle”! She raised her family in Austin and after retiring at the age of 75 she moved to Katy, Texas. She worked many years for Chicago Title in Austin as a Marketing Representative. This gave her the perfect opportunity to use her God given gifts of hospitality and creativity in serving all whom she interacted . Marianna enjoyed serving in so many ways. She was the President of the Austin Junior Forum 1973-1974 where she also participated in the yearly song and dance event called the Follies. She was President of Fiesta at Laguna Gloria in 1976, raising funds for local arts. For many years she was a member of Bible Study Fellowship-Austin, where she also served as an Administrative Leader. Later she joined the BSF class in Katy, to continue studying God’s Word, which she loved so much. During her years in Austin, she was an active member of Covenant Presbyterian Church and later at Kingsland Baptist Church in Katy. Attending her Sunday school class, Daughters of the King, was a highlight of her week. Marianna loved supporting women’s educational goals through the sisterhood of P.E.O. with her HR sisters in Austin and AE sisters in Katy. Most recently she had joined the prayer team at the Pregnancy Help Center of West Houston, which was so near and dear to her heart. Her motivation to serve came from a deep gratitude to her Lord and Savior Jesus Christ and His sacrifice on the cross for the forgiveness of her sins and for all who know Him as Savior, Messiah and King. She leaves behind her well-loved family, daughters Diana Olivia Dorrell Freeman and husband Basil (Bubba), Pamela Lee Dorrell Epstein and husband Jeff; grandsons Justin Maham, Benjamin Maham, Jordan Epstein and Mitchell Epstein. These four young men were the delight of her life. She is also survived by nieces Juliana Snowden, Melissa Snowden Turner and nephew Travis Gray Snowden. A celebration of life will be held on Saturday, October 2, 2021 at 10:30 a.m. in Cat Spring, Texas. Please email [email protected] for details. Memorial contributions in lieu of flowers can be made to the Pregnancy Help Center of West Houston. There are three ways to give at the following website phckaty.org.

The family of Marianna Snowden Gray created this Life Tributes page to make it easy to share your memories.

Marianna “Pudden” Snowden Gray went to be with the Lord on Monday,...

Send flowers to the Gray family.