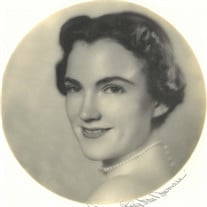 Marilyn passed away peacefully, at home, surrounded by her family members. Her death was the result of multiple chronic conditions which she had been able to successfully manage for many years. She was predeceased by her parents Francis Gleason & Lucile Ralph McGuire as well as her elder brother, F.G. McGuire. She is survived by her children, Dr. Laura Jeffries & Dr. Jerry Street and their children, Sean, Jennifer, Amy, Brian and Rebecca; James Francis (Jim) Jeffries & Gina Jocam Jeffries and their son Jeff; John David Jeffries & Franny Koelsch Jeffries and their children Patrick, Ariana and Rex. Marilyn particularly enjoyed spending time with her family shopping buddy, Mary Katherine Cox. In addition, Marilyn leaves behind five great-grandsons, multiple extended family members, and numerous beloved friends. Marilyn's family would like to especially thank Marie Turner for all of her care, prayers and support during Marilyn's final days. Marilyn grew up in Kansas City, Missouri and attended Catholic schools from kindergarten through her graduation from St. Theresa's High School. She went on to attend Gulf Park College for Women in Gulfport Mississippi. After graduation she moved to Washington D.C. to work for the State Department in the Diplomatic Corp., later leaving to marry and become a full-time mother. After her three children were school-aged, Marilyn became a Registered Nurse, eventually retiring from M.D. Anderson Hospital. Throughout her life, Marilyn always kept her priorities straight. Besides her Irish Catholicism, she loved her family, friends, parties, bridge, reading and travel. Visitation will take place at Dettling Funeral Home, 14094 Memorial Dr., Houston, TX 77079, on Wednesday, December 9 from 6:00-8:00pm with a Rosary/Vigil, followed by Eulogies, beginning at 7:00. A Funeral Mass will take place Thursday, December 10, at 10:30am at St. John Vianney Catholic Church, 625 Nottingham Oaks Trail, Houston, TX 77079, with a reception to follow. At a later date there will be a private interment at the Jeffries Family Cemetery in Crockett, Texas. In lieu of flowers, donations may be made to the American Cancer Society, Hope Lodge Houston, or the charity of your choice.

Marilyn passed away peacefully, at home, surrounded by her family members. Her death was the result of multiple chronic conditions which she had been able to successfully manage for many years. She was predeceased by her parents Francis Gleason... View Obituary & Service Information

The family of Marilyn McGuire Jeffries created this Life Tributes page to make it easy to share your memories.

Marilyn passed away peacefully, at home, surrounded by her family...

Send flowers to the Jeffries family.