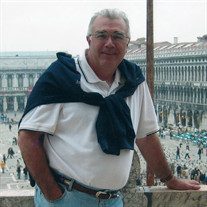 Mark Dwight Garfield was born November 9, 1949 and passed away suddenly on August 9, 2018 at the age of 68. Mark was a devoted Christian, a loving husband, father, and grandfather, and a true friend to many who were fortunate to know him. Mark was born to Florene and Harry Garfield in Houston, where he lived almost his entire life. He graduated from Bellaire High School, where he played football and made the All State team. Mark got his Bachelor’s Degree from Stephen F. Austin State University. During his last year in college at Stephen F. Austin State University, Mark met the love of his life, Susan. Although they both attended Bellaire High School, they did not know each other. Fate brought them together again in the summer of 1973 when they both took a business advertising class at SFA. After Susan graduated and moved to Houston, they began their lifelong romance and married in 1977. They have been “partners in crime” ever since, doing everything from waterskiing at Lake McQueeny, to camping at Enchanted Rock, to hog-riding across the U.S., to attending Sunday School together at Memorial Drive United Methodist Church. Mark was a devoted parent to M.D. and Leslee. He took great joy in participating in his children’s activities, be they sports or theater. He coached every one of M.D.’s sports leagues and was president of the athletic booster club during M.D.’s 8th grade year. He was the President of the “informal” Leslee Garfield Fan Club when she participated in theater and musicals during school. He was very proud of his children and believed in their potential for greatness until the very end. Shortly before his passing, Mark was blessed to meet his first granddaughter, Mallory, who just turned four months old. Mark was beloved by all who met him. He had an amazing gift for friendship and people naturally gravitated towards his positivity and cheer. Mark was blessed with many close personal friendships that carried him through life. He truly never met a stranger and his love of life was infectious. The church was an integral part of Mark’s life. He and Susan joined Memorial Drive United Methodist Church in the mid 1980’s and they both attended the church for over 30 years. They made lifelong friendships in church that remained strong until the very day of his passing. Mark is preceded in death by his parents and his sister Debbie and her family. He is survived by his wife Susan, son M.D., daughter Leslee, son-in-law Mike Oman, granddaughter Mallory, niece Mandy Ordonez, cousins J.B. and Marie Jones, Margaret Morris, and Sharon Kirkland along with numerous second and third cousins and friends who will miss him dearly. A memorial service in celebration of Mark’s life will be held on Friday, August 24, 2018, at 11:00 a.m. at Memorial Drive United Methodist Church, located at 12955 Memorial Drive, Houston, Texas, 77079. A reception will follow in the Friendship Court after the service. In lieu of flowers, the family requests that donations in Mark’s name be made to The Wounded Warriors Project, a charity committed to serving our most severely wounded veterans. Donations can be made online at https://support.woundedwarriorproject.org/Default.aspx?tsid=10043

Mark Dwight Garfield was born November 9, 1949 and passed away suddenly on August 9, 2018 at the age of 68. Mark was a devoted Christian, a loving husband, father, and grandfather, and a true friend to many who were fortunate to know him. Mark... View Obituary & Service Information

The family of Mark Dwight Garfield created this Life Tributes page to make it easy to share your memories.

Mark Dwight Garfield was born November 9, 1949 and passed away...