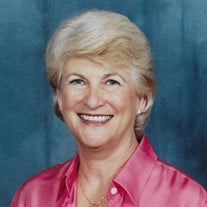 Marki Bonebrake Nolterieke, a devout Christian and loving wife, mother, and grandmother,passed on from this earth into a new life on Thursday, April 25th, 2019. Marki lived an abundantly joyful life. Born on September 4, 1948 in Kansas City, Missouri, she was the oldest daughter of Marion and Bob Bonebrake with sister Marsha born 4 years later, and brother David 2 years after that. At Shawnee Mission East High School in Prairie Village, Kansas, Marki was part of the choir and drill team, and met her high school sweetheart, Marty Nolterieke, at the lockers their sophomore year. Their love story continued to the University of Kansas where Marki majored in education and pledged Tridelta. She was the chapter president junior year and enjoyed many special friendships as part of that sorority. Marty and Marki were married on January 24th, 1970 at Village Presbyterian Church where she was a member most of her childhood. Marty and Marki had a love like no other. They adored each other, and it didn’t matter where they were as long as they were together. After a few years teaching in St. Louis, she and Marty moved to Houston in 1974 and soon after had their first child, Ryan. Their daughter Kelly was born 4 years later. Marki’s family found community in the tight-knit Ashford South neighborhood, and were members of Memorial Drive United Methodist Church before joining Grace Presbyterian Church in 1986. Marki had a way of drawing people to her, and had groups of friends that she never lost touch with from every part of life. Dinner club, tennis and bowling partners, neighborhood friends, parents from Holy Spirit Episcopal School, Bible Study Fellowship, Monday Bible study with a special group of women who have been together for almost 25 years, patients from the dental office where she worked for 33 years, business owners of her beloved Galveston where she and Marty spent every moment they could...everyone was known and loved by Marki. She just had a way of holding each person’s stories and caring about them deeply. Her husband was her best friend, partner, and travel buddy. She took deep delight in her children, but her biggest joy was her grandchildren. Nothing made “Nana” happier than playing, laughing, and sharing in special memories with her grandchildren. Marki was preceded in death by her mother, Marion McMillen Bonebrake. We know they are singing in heaven together. Marki is survived by her adoring husband of 49 years, Marty Nolterieke, son Ryan Nolterieke, daughter-in-law Jen, grandsons Ben, Drew, and Cade, daughter Kelly Broaddus, son-in-law Matt, granddaughter Darcy, and grandson Owen, sister Marsha Bourgeois, brother-in-law Hank,and nephews Scott and Zac, and brother David Bonebrake, sister-in-law Debbie, niece Vicki and nephew Doug. In lieu of flowers, we would like to honor Marki through a Foundation we are setting up in her name. These funds will go toward her grandkids’ futures/college tuition and research for curing and preventing macular degeneration and prevention of pulmonary embolisms. If you are interested in donating to these causes, email [email protected] We will notify you when the foundation is set up with the instructions to give.

Marki Bonebrake Nolterieke, a devout Christian and loving wife, mother, and grandmother,passed on from this earth into a new life on Thursday, April 25th, 2019. Marki lived an abundantly joyful life. Born on September 4, 1948 in Kansas City,... View Obituary & Service Information

The family of Marki Bonebrake Nolterieke created this Life Tributes page to make it easy to share your memories.

Send flowers to the Nolterieke family.