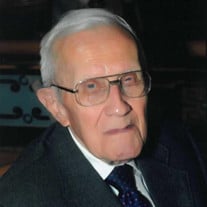 MARLIN LEE SHERIDAN of Coldspring, Texas, passed away September 2, 2017 at the respectable age of 96. Marlin began his journey in Johnstown, PA on May 11, 1921. He spent his public school days in Johnstown, along with his siblings (Jane, Melvin, and Jack). After high school graduation, Marlin attended Bucknell University, where he earned his bachelor’s degree in civil engineering. It was the start of an amazing career. Jane introduced him to Elizabeth (Betty) Lee, and that was the end of Marlin’s free agency. Their marriage lasted 66 years, until Betty passed away, and survived 6 children. World War II and the Navy had plans for Marlin, and the wedding pictures showed a lovely bride in her gown and the groom in his sailor suit. Marlin’s engineering love was designing and flying in aircraft, and some of his happiest work hours were seeing the results of his engineering designs, particularly wing design. Over his career, he became known as a foundation guy. One of his lasting achievements was designing the foundation for the first supersonic wind tunnel – before supersonic flight ever occurred – so he completed the design without data – and it worked. Over the years, Marlin obtained his PhD in civil engineering from the University of Michigan and taught at Bucknell University and ended his tenure there as the Chair of the Civil Engineering Department. He co-owned civil engineering consulting firms in Lewisburg and Canonsburg / Washington, PA and was active in the Methodist Church. He moved on to work with US Agency for International Development through the University of Pittsburgh, with an assignment in Quito, Ecuador. Both Marlin and Betty caught the international work / travel bug. International assignments included Iran, Greece, Turkey, Zimbabwe, and Saudi Arabia. Between work and leisure, they were on every continent and probably every airline and cruise line. They had 70+ cruises, with the capstone being a round-the-world cruise. Marlin is survived by 6 children: Susan Sudduth of Humble, Texas, married to Carlton; Carol Belfiore of Fort Collins, CO, married to Larry; David Sheridan of Carlisle, PA, married to Antonia; Anne Fannan of Wilmington, DE, married to John; Nancy Kralik of Houston, TX, married to Jerry (deceased); and Dean Sheridan of Houston, TX, married to Jane Davis. Grandchildren: Carol, Melissa, Jenny, Sarah, Dave, Lisa (deceased), Laura, Kaitlin, Galen, and Logan. 12 Great Grandchildren complete the heritage. Visitation will be held for Marlin from 1:00 to 3:00 PM Thursday, September 7, followed by the service at Dettling Funeral Home, 14094 Memorial Drive in Houston. In lieu of flowers and in memory of Elizabeth and Marlin, memorial donations may be made to the Lewy Body Dementia Association (http://www.lbda.org) or your favorite charity.

MARLIN LEE SHERIDAN of Coldspring, Texas, passed away September 2, 2017 at the respectable age of 96. Marlin began his journey in Johnstown, PA on May 11, 1921. He spent his public school days in Johnstown, along with his siblings (Jane, Melvin,... View Obituary & Service Information

The family of Marlin Lee Sheridan created this Life Tributes page to make it easy to share your memories.

Send flowers to the Sheridan family.