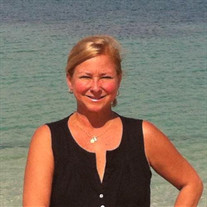 Marta Kristen Livingston Lane April 17, 1968-January 15, 2018 A native-born Houstonian, Marta was five months old when her overseas adventures began with a family move to Trinidad, West Indies and then on to Caracas, Venezuela three years later. Even after moving back to Houston, she never lost her love of traveling or the beach. Family holidays often featured beach destinations, and most Fridays of her boys’ early years found her packing them up to spend the weekend on Lake Livingston, where fishing, sun and watersports filled their days. Marta graduated from St. Agnes Academy in Houston in 1986 and earned a Marketing degree from the University of Texas at Austin in 1990. Her first job out of school was for TIPS, a commercial real estate company. After a couple years she transitioned to the marketing department at First Community Credit Union. In 1997 she left to co-found her own company, The Marketing Department. Over almost two decades, the two-person firm evolved into PMD Marketing, Inc., and by the time Marta left the company a few years ago, they had several full time employees and many freelance workers on the payroll. Marta worked from her home office, and her young sons were her priority. As they became active in team sports, she was an enthusiastic cheerleader from the stands. Marta had a quick mind, and you could always count on her for a witty comeback. Her business sense was unerringly on point and she prided herself on being organized, productive, and finding the best deal. Marta did not suffer fools gladly and she was fiercely independent, but always thoughtful. She never failed to make the time to help a neighbor or hunt for special gifts for friends and family. A creative cook, Marta enjoyed making fresh, delicious dinners for her family. Her lasagna, a recipe she made first as a teenager, was legendary, and her chicken and sausage gumbo was so wonderful that it became the center of the Christmas menu in her home. She was also an avid reader. Marta is survived by three dear sons who she loved with her whole heart, Cooper (19), Cameron (17) and Crawford (14) of Houston; her mother, Jean Woodhouse of Houston and father, Jerry Livingston (Rebeca) of Quito, Ecuador; sisters Tanya Livingston Tovilla of Houston, Stacy Livingston Rushton (Simon) of Dubai, UAE and Christina Livingston Weiblen (Darrell) of Houston, and many nieces and nephews. A private celebration of Marta’s life will be held at a family home on Saturday, January 27th. Memorial donations can be made in Marta’s name to the Waggoner Center at the University of Texas: ”https://utdirect.utexas.edu/apps/utgiving/online/nlogon/?menu=NSSM” Marta was a devoted mother, a thoughtful and loving daughter and the best of sisters. She will be deeply missed.

The family of Marta Kristen Livingston Lane created this Life Tributes page to make it easy to share your memories.

Send flowers to the Lane family.