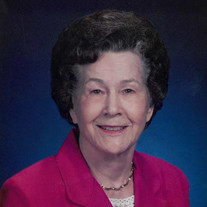 Mary Katherine Ledbetter Crenshaw passed away on January 1, 2016. She was born in Houston, Texas on December 30, 1920, the daughter of Mary Simpson Ledbetter and Rev. Robert Edgar Ledbetter Sr. She graduated from High School in 1937 and Lon Morris College in 1939 in Jacksonville, Texas. She received her Bachelor Degree in Library Science from Texas Woman’s University, Denton, Texas in 1941. On June 24, 1943, she married T. C. “Sandy” Crenshaw in Jacksonville, Texas while he was serving in the United States Army Air Corps at Gulfport Air Base in Mississippi. While living there she worked at the technical and post libraries on the air base. She served as a librarian in Texas public schools for seventeen years and completed her service at the Texas Medical Association Library in Austin, Texas. Later in life she became involved in Genealogy and was tenacious in her research, a gift that will be appreciated by her extended family for generations. She was a member of the Samuel Sorrell Chapter of the National Society of The Daughters of the American Revolution (DAR) in Houston, TX. and the Texana Chapter of the Daughters of the Republic of Texas (DRT) in Edna, TX. She is preceded in death by her parents, her husband, her brothers, Dr. Robert E. Ledbetter Jr. of Austin, TX and Lt Col. Llewellyn Harper Ledbetter of Hampton Virginia, and her son Robert Henry Crenshaw of Austin, Texas. She is survived by her children Richard Carl Crenshaw, wife Ellen and granddaughter, Richelle of Portland, Texas, her daughter Sandra Kay Schneider, grandson Christopher Carl Schneider of Houston and Grandson Cameron Hail Schneider of Ft Worth, Texas, son Moss Alan Crenshaw, wife Rhonda, grandson Samuel Alan Crenshaw of Colleyville, TX and granddaughter Lynette and husband Andrew Arbini of Wylie, TX. She will be remembered by her family as a gracious, gentle, loving mother who put God and family first. There will be a Celebration of life and Memorial Service at 2:00pm, Saturday, January 9, 2016 at Parkway Place Chapel, 1321 Park Bayou Dr. Houston, Texas 77077 with a reception following the service in The Cabana Room. In Memory of Mary Katherine Crenshaw, donations may be made to Memorial Drive United Methodist Church, 12955 Memorial Dr. Houston, Texas 77079.

Mary Katherine Ledbetter Crenshaw passed away on January 1, 2016. She was born in Houston, Texas on December 30, 1920, the daughter of Mary Simpson Ledbetter and Rev. Robert Edgar Ledbetter Sr. She graduated from High School in 1937 and Lon... View Obituary & Service Information

The family of Mary Katherine Crenshaw created this Life Tributes page to make it easy to share your memories.

Send flowers to the Crenshaw family.