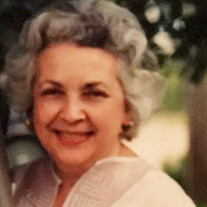 Mary Ellen entered what she described as her “last great adventure” on September 24, 2017. She is preceded in death by her husband of 63 years, Jim Daniel, beloved son Jimmy, son-in-law Rick Baron, her parents and four siblings. She is survived by daughters Julie and husband Bill Sias, Valerie Baron, Meme and husband Jack Horton, and 10 grandchildren, Katie Sias Gerrish and husband John, Billy Sias and wife Kate, Jimmy Sias, Ben, Jonathan and David Baron, Ellen, James, Charlie and Laura Leigh Horton. Mary Ellen was born and raised in New York City where she attended the Dominican Academy. In 1944, she met Jim at a USO dance. The two were very attracted to one another but Mary Ellen was leaving for Cornell University and Jim who was in Navy Intelligence needed to complete his masters from the University of Texas. Jim left the United States to lead the Schlumberger office in Venezuela. Mary Ellen took a post graduate cruise and the two reunited and married May 20, 1950. McAllen, Texas was their first home which Mary Ellen admitted was a huge culture shock after her exciting life in NYC, but she nevertheless embraced new friends, new foods, and the beauty of the Valley. In 1955, Jim and Mary Ellen moved to Houston. Mary Ellen was a devoted wife, mother, grandmother and friend. Her hallmark was her plain common sense which made her a confidant to many. Her skills in budgeting, cooking and sewing were legendary. Jim always said their girls were better dressed than anything they could buy in the stores. In later years Mary Ellen acquired certification as a librarian. She also volunteered for many organizations, particularly those associated with the church. She and Jim were founding members of St. Cecilia Catholic Church, and for over 50 years they belonged to their cherished Holy Name of Mary Family Guild. Special thanks go to Maxine Mattox and the team of caregivers who cared for Jim and Mary Ellen for many years. The Daniel Family will be present receive friends, Wednesday, September 27th from 6-8 pm with Vigil beginning at 7 pm at Dettling Funeral Home, 14094 Memorial Dr., Houston, TX 77079. The Funeral Mass will be celebrated Thursday, September 28th at 10:00 AM at St. Cecilia Catholic Church, 11720 Joan of Arc Drive, Houston, Texas 77024. Mrs. Daniel will be laid to rest following a reception. In lieu of flowers donations may be made to the Charity Guild of Catholic Women, Alzheimer’s Foundation of America or Harris County friends of the Library.

Mary Ellen entered what she described as her &#8220;last great adventure&#8221; on September 24, 2017. She is preceded in death by her husband of 63 years, Jim Daniel, beloved son Jimmy, son-in-law Rick Baron, her parents and four siblings.... View Obituary & Service Information

The family of Mary Ellen Daniel created this Life Tributes page to make it easy to share your memories.

Mary Ellen entered what she described as her “last great adventure”...

Send flowers to the Daniel family.