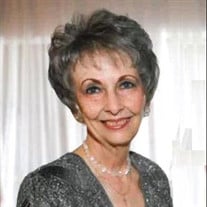 Mary Shirley Rose Kraus was born May 20, 1931 and died too soon on August 1, 2018. Shirley was a devoted and loving wife, mother, grandmother, friend to many, and volunteer extraordinaire. Born to James William Rose and Josie Mae Price, Shirley was the younger sister of Gloria LaVonne Rose who preceded her in death. Shirley was a proud lifelong Houstonian. She was a graduate of John H. Reagan High School and attended The University of Houston. While working one summer she met and married Herman A. Kraus on July 9, 1955. This began a love affair that lasted 54 years. Shirley affectionately referred to Herman as “her Shug” and that is how he was known to her many friends. Shirley loved life. She was always smiling, finding the positive in any situation, and seeing the beauty within everyone she met. Her words of encouragement lifted spirits and gave inspiration. Her many hobbies included modeling, dancing, and traveling. She held memberships in Pi Lambda Chi, The Assistance League, The Knife & Fork Club, and many other organizations throughout her life. The church was an integral part of her life. She joined Memorial Drive United Methodist Church in the early 1970’s with her family. She was an active member of the United Methodist Women for over 40 years, holding many circle positions. Her greatest love and gift to the church was teaching children about the Bible and Jesus in Sunday School. Teaching for over 30 years, she even taught the children of former students. In honor of Shirley, the church recognized her with the “Shirley Award” which is given annually to the Children’s Teacher of the Year. Shirley was actively involved in the Houston Alumnae Panhellenic Association and the Houston Alumnae Club of Alpha Gamma Delta since her initiation in the 1960s. She served as President of the Alpha Gamma Delta Houston Alumnae Club in 1971-73 and was involved in numerous offices and committees to the present. For her faithful and continued years of service, she was bestowed the Honor of Epsilon Pi with Diamonds and Pearls. Serving as the Delegate for Alpha Gamma Delta in Panhellenic for 33 years, she also volunteered her time on numerous committees, including Bylaws, Community Service, Programs, Recruitment Information, Scholarship Selection, Social, Ways & Means, and Wine Tasting. There was not a position she wasn’t afraid to take head on. Shirley was distinguished as a Citation Member in 1989 and is a Past HAPA President (1999-2000). In 2004 she became an Honorary Board Member, followed by standing as an "Emeritae" in 2010. Above all else, Shirley had a tremendous love for her children and grandchildren. She was active in their schools and every organization they belonged to - PTA, Little League, Scouting, and Booster Clubs. Never one to miss a game, recital, or important event, she was exceptionally proud of her family and their individual accomplishments. Shirley is preceded in death by her husband Herman and is survived by her son Mike, daughter Kathy, son-in-law Andrew, grandchildren Shelley, Molly and Nick; along with numerous nieces and nephews. A memorial service in celebration of Shirley’s life will be held Wednesday, August 15 at 11:00 a.m., at Memorial Drive United Methodist Church, with a reception following in the Friendship Court. As a tribute to Shirley, please consider wearing a shade of pink. Those wishing to make memorial contributions may direct them to: Houston Alumnae Panhellenic Foundation, 5868 A-1 Westheimer Road Box 342, Houston, TX 77257-5641, Alpha Gamma Delta Foundation, 8710 N. Meridian St., Indianapolis, IN 46260, or the Caring Forever Foundation at MDUMC, 12955 Memorial Dr., Houston, TX 77079.

Mary Shirley Rose Kraus was born May 20, 1931 and died too soon on August 1, 2018. Shirley was a devoted and loving wife, mother, grandmother, friend to many, and volunteer extraordinaire. Born to James William Rose and Josie Mae Price, Shirley... View Obituary & Service Information

The family of Mary Shirley Kraus created this Life Tributes page to make it easy to share your memories.

Send flowers to the Kraus family.