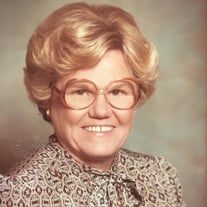 Mary Grace “Rusty” Stephan, age 93, passed away peacefully September 15, 2019 of natural causes. Rusty was born November 8, 1925 in Laurel, MS to Louis LeMieux and Justine Gertrude LeMieux (nee Masson) as one of nine children. Later, when her mother died, she moved to New Orleans to live with her older sisters and finish high school. After graduating from Mississippi State College for Women, she had a brief stint in NYC then moved to Houston and worked as an insurance company administrator. There she met Werner Johan “Johnny” Stephan with whom she had four children. Rusty began selling real estate when her youngest child entered 6th grade, eventually obtaining her Brokerage license and opening her own agency. After retirement she enjoyed visiting with friends and family, especially her grandchildren and great-grandchildren. Rusty was kind and funny with a generous smile, and she loved to socialize and share her opinions. She was a strong woman who taught her daughter to stick up for herself (having three brothers also contributed) and imbued all her children with the qualities of honesty, forthrightness, hard work and self-reliance. She was an avid reader of novels and newspapers (daily), and loved to play bridge. She attended the New Orleans Jazz Festival in 1982 and suggested her kids would enjoy it; we did for decades. Rusty remained married to Johnny for 29 years until his untimely passing. She also was preceded in death by her parents, Louis and Justine, her sisters, Catherine and Genevieve, and her brothers Louis, Pierre, Ferdinand and Fredrick. Rusty is survived by her sister Gertrude “Trudy” Hogan, her son Eric (Darlene), son Paul (Libby), daughter Lisa, son Douglas (Bliss), granddaughters Sara (Chad) and Zoe, grandsons Garrett (Morgan), Adam (Heather), Masson and Cade, and great-grandchildren Lily, Sunny and Tyler, along with many beloved nieces, nephews and their extended families. Rusty spent her final day with Lisa at the hairdresser and eating at her favorite Mexican restaurant and, satiated by that activity, laid down to sleep and passed peacefully. While she will be missed by all who knew her, we can’t think of a better way to go. Please join us to celebrate her life Friday September 27, 2019, between 2 p.m. — 4 p.m. at Dettling Funeral Home, 14094 Memorial Dr. Houston.

The family of Mary Grace Stephan created this Life Tributes page to make it easy to share your memories.

Send flowers to the Stephan family.