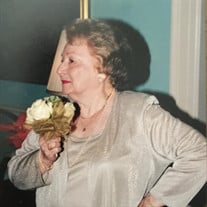 Maureen Driscoll Koch died peacefully on Sunday, November 29, 2015 surrounded by her family in Houston, Texas at age 90. Maureen was born December 28, 1924 in Brooklyn, NY to Mary and Edward Driscoll. Maureen married the love of her life, George Koch on January 17, 1948. They moved to Texas in 1966 where they raised their beautiful family and made many lifelong friends. Maureen is survived by her husband of 67 years, George Koch; her daughter, Maureen and son in law, Rusty Miller; her sons and daughters in law, George and Elsie Koch and Gary and Susan Koch; her daughters Denise Greene and Tricia Koch; and her son, Greg Koch. She was loved by her grandchildren Tres’ and Nikki Miller, Christopher and Mollie Miller, Jonathan Greene, Jacob Koch, Joseph Koch, Joann Koch and Kendall Greene; and blessed with great grandchildren Mason and Max Miller. She is preceded in death by her sister, Patricia Driscoll; her brothers, Edward, Donald and Jackie Driscoll, and her parents. In addition to being a full time mother to six, Maureen was a member of Charity Guild of Catholic Women for over 30 years (Board of Directors); active at St. John Vianney Catholic Church (1st Parish Council, Women’s Club and CCD teacher); lifetime member of PTA and President of Meadow Wood Elementary PTA; and a volunteer at Memorial City Hospital. The Koch family will be present to receive friends, Thursday, December 3, 2015 from 5:30 PM until 7:30 PM with a Holy Rosary being recited at 6:30 PM at Dettling Funeral Home, 14094 Memorial Dr., Houston, TX 77079. The Funeral Mass will commence Friday, December 4, 2015 at 10:30 AM at St. John Vianney Catholic Church, 625 Nottingham Oaks Trail, Houston, TX 77079. Graveside services will follow Holy Mass at VA Houston National Cemetery via motorized cortege. Pall bearers will be her grandchildren. In lieu of flowers, please make donations to Charity Guild of Catholic Women or Houston Alzheimer's Association. A special thank you from the Koch family to Interactive Care and Tarrytowne Estates as well as the staff at St. Dominic Village for their kindness and support.

Maureen Driscoll Koch died peacefully on Sunday, November 29, 2015 surrounded by her family in Houston, Texas at age 90. Maureen was born December 28, 1924 in Brooklyn, NY to Mary and Edward Driscoll. Maureen married the love of her life,... View Obituary & Service Information

The family of Maureen Driscoll Koch created this Life Tributes page to make it easy to share your memories.

Send flowers to the Koch family.