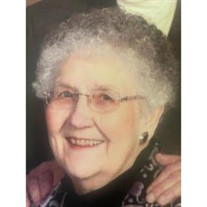 Mrs. Melba Jean Crain, 89, passed away on May 2, 2022 in Houston, TX. She was born on October 27th, 1932, at home in Strasburg, MO to Austin and Pearl Burris. Following high school, she attended William Jewell College in Liberty, MO. She graduated in 1953 with a BA in English/Speech. William Jewell is where she met and married the love of her life, Donald Lee Crain. They were married for over 66 years, until his death in 2020. Aside from her family, her biggest joys were furthering her education and sharing her knowledge with others. She loved language and grammar, and began working on a masters degree at BWC in the fall of 1971. She finished her Master’s Degree in English at the University of Tulsa. Her first teaching job was at a high school in West Lafayette, IN while her husband worked on his PhD. She also taught some at the Bartlesville Public High School. However, she was most proud of teaching at Bartlesville Wesleyan College for 17 years, where she also became the Public Relations Director. She was at BWC from 8/72-8/91. She then worked for Phillips Petroleum Company until 1994. Melba was active for many years in Toastmistress, volunteered at MUTUAL Girl’s Club, Tuesday House and was a member of First United Methodist Church where she worked from 1994 in a public relations position until retirement in 1997. She was a beloved mother, grandmother and great grandmother. She lives on in her daughters; Cheryl (Terry)Foster, Kristin Crain of Houston, TX and Karis Crain of Tulsa, OK. Her four grandchildren, Chase (Stephanie) Lansford, Cole Lansford, and Courtney (Aaron) Damm of Houston, and Ceanna Simms of California; four great grandchildren, Elliott and Nolan Lansford, Owen and Nora Damm all of Houston; one sister, Lois Kimrey of Kansas City. She was preceded in death by her parents, three brothers and one sister, Ralph Burris, Raymond Burris, Don Burris and Ruth Starkey. Mrs. Crain was cremated under the direction of Dettling Funeral Home. There are no plans for a public service.

Mrs. Melba Jean Crain, 89, passed away on May 2, 2022 in Houston, TX. She was born on October 27th, 1932, at home in Strasburg, MO to Austin and Pearl Burris. Following high school, she attended William Jewell College in Liberty, MO. She... View Obituary & Service Information

The family of Melba Jean Crain created this Life Tributes page to make it easy to share your memories.

Send flowers to the Crain family.