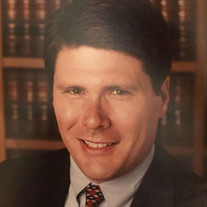 Please go to the link below to view Mr. Fleming's Funeral Mass on Wednesday, July 8, 2020: https://youtu.be/BCHDGVU552w On July 1, 2020, Michael Paul Fleming, beloved and highly regarded by all who knew him, unexpectedly passed away in Houston, Texas. He was 57 years old. Michael was born on June 25, 1963 in Orlando, Florida, the second-youngest of eight children. He is survived by his wife and college sweetheart, Natalie, whom he married in 1988; his children, Shannon (Rohit), Nicholas, Patrick, Michael Jr., Eamon, and Celeste; mother Terry; siblings Patricia, Claire, Harry, Frank, Madeline and Siobhan; and many, many cousins, including George Fleming, Maura, Lawrence, and Sean Tracey. Michael also leaves behind Rudy, his affectionate golden retriever of 11 years. Michael is preceded in death by his father, Joseph, and brother, James. Michael, who in addition to being strong in his faith, was gracious and honorable, brilliant yet humble, and always believed in people. He was known for his dry wit and humor, appetite for history and genealogy, and love of all things Ireland, having visited the country over 19 times and being a founding member of the Houston Irish Society. He completed eight marathons in his lifetime, including four in Dublin, Ireland alongside his wife and children. Above all else, Michael was devoted to his family. In 1984, Michael graduated from the University of St. Thomas in Houston, Texas, where he later served on its board of directors for fifteen years. In 1987, Michael received his law degree from the University of Houston Law Center. He was licensed to practice law in Texas and New York, and was also licensed as a solicitor by the Law Society of Ireland. In addition, Michael was Board Certified as a specialist in Personal Injury Trial Law and Real Estate Law by the Texas Board of Legal Specialization. At age 33 in 1996, he was elected County Attorney for Harris County, Texas, and then re-elected in 2000. In 2000, Michael successfully represented the county before the United States Supreme Court. He later established his private practice, Michael P. Fleming & Associates, P.C., in 2002. The Fleming family will be present to receive friends Tuesday, July 7, 2020 from 6:00 PM until 9:00 PM with a Vigil Service beginning at 7:00 PM at St. John Vianney Catholic Church, 625 Nottingham Oaks Trail, Houston, Texas 77079. The Funeral Mass will commence Wednesday, July 8, 2020 at 10:30 AM at St. John Vianney Catholic Church. Michael will be laid to rest at Forest Park Westheimer Cemetery on Friday, July 10, 2020, in a private family ceremony. The Fleming family wishes to express their deep gratitude for the outpouring of love and support from the community. Due to the COVID-19 Pandemic, the Funeral Mass will be live streamed Wednesday at 10:30 AM for family and friends that may be unable to attend due to concerns of the Pandemic. The family will schedule a Memorial Mass at a later date for a further celebration of his life. Please visit www.DettlingFuneral.com on Wednesday, July 8, 2020 to find the live streaming link. In lieu of flowers please consider contributions in Mike’s memory to St. Mary’s Seminary at www.smseminary.org .

Please go to the link below to view Mr. Fleming's Funeral Mass on Wednesday, July 8, 2020: https://youtu.be/BCHDGVU552w On July 1, 2020, Michael Paul Fleming, beloved and highly regarded by all who knew him, unexpectedly passed away in Houston,... View Obituary & Service Information

Please go to the link below to view Mr. Fleming&#39;s Funeral Mass...