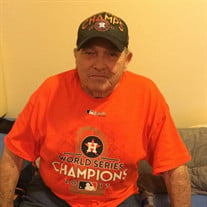 Michael James Walsh, 83, of Houston passed away Tuesday, March 20, 2018. He was born February 10, 1935 in Omaha, Nebraska to Leo John Walsh and Francis Phyllis Mancuso. He is preceded in death by his wife, Valeria Kaminski Walsh; parents, Leo Walsh and Francis Mancuso; granddaughter, Lisa Jones; great grandsons, Tavin Parker and Chase Menn. Mr. Walsh is survived by his five children, Sanda Walsh & long time companion Sammy Wells, Katy Jones & husband Tim, Mary Shreve & husband Joseph, Debbie Johnson & husband Kent and Michael R. Walsh & wife Cyndy Avery; grandchildren, Jennifer Dujka & husband Joe, Carl Wells & wife Ferrin and their children, Owen and Oliver, Stacy Jones and her daughter Nobalie Fulcher, Jaime Jones and his children Ashley and Haylee, Christy Brown & husband Kyle and their daughter Kylie, Sam Shreve & his wife Ashli and their children Easton and Ellie, Brandon Dague & wife Natalie and their children, Mikaela and Leah, Lauren Rivera & husband Lee and their children Max and Marlee; Kyle Johnson & wife Melly, Kameron Johnson, Kyle Pitman & wife Christinah and their children Elizabeth and Kyleigh, Jayme Pitman and husband Bradley Nevills, her daughter Desiree and son Matthew and great granddaughter Aries; as well as numerous extended family and dear friends. Mike grew up in Omaha, Nebraska moving to Houston when he was a teenager. Mike began his career as an electrician with Bronc Electric and Brown and Root. He worked as a purchasing agent for many years with CB Southern and Bluewater Maintenance, retiring from Cooper industries in 2005. It is in Houston where he met and married the love of his life Val Kaminski. He and his wife raised a large family where he was a devoted husband, father, grandfather and great grandfather. Mike was a devout Catholic and a longtime member of St. John Neumann Catholic Church in Houston. He was the Past Grand Knight of Knights of Columbus, Fr. William Woods Council 7901, and Member in the Fourth Degree of Msgr. William D. Steele Assembly 2033. Mike was a loving, caring person with a strong will and even stronger faith. He played softball for many years and was an avid hunter. He loved all sports, but especially the Houston Astros whom he was able to watch win the 2017 World Series after following them since they were the Colt45. His favorite pastime was spending time with his children, grandchildren and great grandchildren. He loved his family more than anything. He was loved dearly by those who knew him and will be greatly missed. The Walsh family will be present to receive friends Monday, March 26, 2018 from 6:00 PM until 8:00 PM with a Holy Rosary being recited at 7 PM at Dettling Funeral Home, 14094 Memorial Drive, Houston, TX 77079. The Funeral Mass will commence Tuesday, March 27, 2018 at 9:30 AM at St. John Neumann Catholic Church, 2730 Nelwood Drive, Houston, TX 77038. Graveside Services will follow in Forest Park Westheimer Cemetery via motorized cortege. A reception and luncheon will follow graveside services at St. John Neumann Catholic Church.

Michael James Walsh, 83, of Houston passed away Tuesday, March 20, 2018. He was born February 10, 1935 in Omaha, Nebraska to Leo John Walsh and Francis Phyllis Mancuso. He is preceded in death by his wife, Valeria Kaminski Walsh; parents,... View Obituary & Service Information

The family of Michael James Walsh created this Life Tributes page to make it easy to share your memories.

Send flowers to the Walsh family.