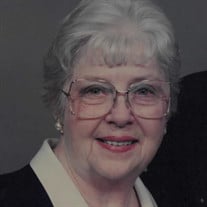 Myra Lee Drury, 90, of Houston passed away Friday, July 12, 2019 due to Pulmonary Embolisms. Myra was born February 12, 1929 in Worden, Illinois to Joseph and Golda Klunk. She is preceded in death by her daughter Denise Drury and is survived by her husband of 68 years, Leroy Drury, her daughter, Marilyn Chandler and her grandsons, Carl and Marc Chandler. Myra grew up in Worden, IL and graduated from Edwardsville, Illinois High School. She earned a Bachelor of Science in Elementary Education at Bradley University in Peoria, IL. She enjoyed a fulfilling career as an Elementary School Teacher in Alpine, New Jersey, Houston, Texas and Los Altos, California teaching students in kindergarten through the fourth grade. It was during her collegiate years that she met the love of her life Leroy in 1949. They were married on June 30, 1951 while he was in the United States Army. Upon his discharge from the service in 1953, Leroy began his career with Shell Oil Company, and they lived in Houston, Texas several times, Dumont, New Jersey, Los Altos, California, and London, England. She was a tremendous asset during the transfers, because she always moved with a very positive and futuristic outlook, which resulted in very successful transfers, transitions and pleasant learning experiences. Myra enjoyed dining at nice restaurants, sewing, and painting; and was a long time member of Lakeside Country Club and The Houstonian Hotel, Club and Spa, where she thoroughly enjoyed participating in water aerobics. She was an excellent teacher and truly loved children. She adored her husband, daughter and grandsons and loved spending time with them. She was loved by those who knew her and she will be greatly missed. The Funeral Mass will be celebrated Tuesday, July 23, 2019 at 1:00 PM at St. Cecilia Catholic Church, 11720 Joan of Arc Dr., Houston, TX 77024. A reception will follow Holy Mass in the community center on the church campus. Mrs. Drury will be laid to rest at Memorial Oaks Cemetery following the reception. In lieu of flowers, contributions in Myra’s memory may be made to the charity of your choice.

Myra Lee Drury, 90, of Houston passed away Friday, July 12, 2019 due to Pulmonary Embolisms. Myra was born February 12, 1929 in Worden, Illinois to Joseph and Golda Klunk. She is preceded in death by her daughter Denise Drury and is survived... View Obituary & Service Information

The family of Myra Lee Drury created this Life Tributes page to make it easy to share your memories.

Send flowers to the Drury family.