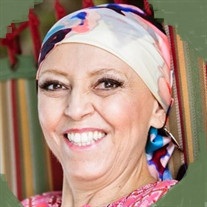 Myriam Silvana Chavez Saenz went to be with our Lord on Saturday, March 4, 2017. She passed away at her home surrounded by family and friends. She began her valiant battle with breast cancer in 2010, and in 2011 was able to enjoy three years of remission before the cancer metastasized to her bones in 2014. Myriam is survived by her mother, Dora Arellano de Saenz, her husband, Jaime Chavez, and her children, Catherine and Sebastian. She is also survived by her brothers and sister-in-laws, Carlos and Layla, and Diego and Diana, as well as numerous extended family members. She is preceded in death by her father, Guillermo Saenz. Myriam was born on August 1, 1965, in Quito, Ecuador. She was raised there and attended school at Santo Domingo de Guzman and La Inmaculada de Quito, where she loved to study and play volleyball. During her younger years, she and her family spent much time at their farm in Santo Domingo. Myriam began her career working for the national oil company of Ecuador, Petroecuador, as a computer programmer where she met the love of her life, Jaime. They both loved to mountain climb and even dared to climb the highest mountain in Ecuador, Chimborazo. In 1990, Jaime and Myriam moved to Houston, Texas where they were blessed with two wonderful children and shared a loving, God-centered marriage. Myriam first entered the non-profit world as an accountant at Foundation for Life, an organization she would grow in. She then began work at the Holy Name Passionist Retreat Center before moving close to home at Fort Bend ISD. In 2010, she returned to the Foundation for Life to work as the business manager. There she was able to fulfill her life’s passion of helping others and faithfully fought for the rights of the unborn. Myriam supported countless moms and babies that she met along the way, while working at this pro-life maternal care assistance. She was also a devout servant of God through numerous church organizations and Catholic Daughters of America. After her diagnosis, she became an active member in many breast cancer research organizations, cancer support groups, and in the fight to end cancer. Myriam will always be remembered for her bright smile, brave soul, love of life, faith in God, and her unending perseverance. As her legacy, Myriam leaves behind a loving husband, two beautiful and accomplished children, as well as innumerable friendships, as witnessed by the love and support given to her throughout her battle with cancer. The Chavez Family will be present to receive friends and family, Friday, March 10, 2017 from 6 to 9 PM at Dettling Funeral Home, 14094 Memorial Drive, Houston, Texas, 77079. A rosary will be said during that time at 7 PM. A funeral mass will be held at 11 AM on Saturday, March 11, 2017 at St. Theresa Catholic Church, 705 St. Theresa Boulevard, Sugar Land, TX, 77498 with a reception following. Her burial will be held right after at Davis-Greenlawn Cemetery, 3900 B.F. Terry Blvd., Rosenberg, TX, 77471. If you would like to make a donation in lieu of flowers, a donation may be made to the Foundation for Life www.foundationforlife.org. An organization that Myriam loved and held close to her heart. We hope her legacy will live on there forever.

Myriam Silvana Chavez Saenz went to be with our Lord on Saturday, March 4, 2017. She passed away at her home surrounded by family and friends. She began her valiant battle with breast cancer in 2010, and in 2011 was able to enjoy three years... View Obituary & Service Information

The family of Myriam Silvana Chavez created this Life Tributes page to make it easy to share your memories.

Myriam Silvana Chavez Saenz went to be with our Lord on Saturday,...

Send flowers to the Chavez family.