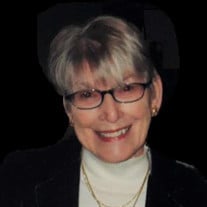 Nancy Louise Purtell Edwards passed away on November 12, 2017 at her home in Houston, Texas. She was born on August 20, 1928 in Detroit, Michigan, attended The Liggett School in Detroit, The Spence School in New York City and graduated from Smith College in 1950. She was preceded in death by her parents, Joseph and Thelma Purtell, and is survived by her loving husband of 66 years, Gordon (Bob) Edwards; their son Dr. Gordon (Win) Edwards and his wife Janet of Katy, Texas, and their children Jennelle Berger and her husband Greg and Linda Wolfe and her husband Nick; their daughters Sharon L. Edwards of Atlanta, Georgia, and Susan E. Bopp of Houston, Texas, and her children Austin and Lindsay; and their five great grandchildren, Carson and Trent Berger and Ashlynn, Tyler and Brady Wolfe. She is also survived by her brothers Dr. Michael Purtell of Baltimore, Maryland, and Timothy Purtell of Shelter Island Heights, New York. Nancy and Bob were truly “the girl” and “the boy” next door. They first met each other in June 1948 on Shelter Island, New York, where their parents, by sheer coincidence, had rented summer homes which were adjacent to each other. Nancy was a loving homemaker whose every day was devoted to her family whom she loved very much. Shortly after the family’s move to Houston in 1973 she served several years as a volunteer at the Memorial Herman Memorial City Hospital. She had been an active member of the Junior League which she had joined in Brooklyn, New York, in 1955 and, on the family’s return from a ten year assignment in England and Canada, rejoined the Junior League in Houston in 1973. She continued as a sustaining member to the present day. Nancy had an enduring interest in fine arts and in the family’s early years in Houston she trained to be, and subsequently served as, a volunteer docent at Bayou Bend. In addition, she and Bob were long time subscribers to the Houston Pops concerts and the Alley Theater’s yearly series of productions. The family would especially like to express their many, many thanks and everlasting gratitude to Ollie, Shelia, Shellie and Annette for the loving care and devotion they provided to Nancy over the past several years. They made her life so much more comfortable during the four years of her paralysis. A Memorial Service will be held on Saturday, December 2, 2017 at 2 P.M. at Holy Spirit Episcopal Church, 12535 Perthshire Road, Houston, TX 77024 with a reception to follow. In lieu of flowers, please consider contributions in Nancy’s memory to the Holy Spirit Episcopal Church or to a charity of your choice.

Nancy Louise Purtell Edwards passed away on November 12, 2017 at her home in Houston, Texas. She was born on August 20, 1928 in Detroit, Michigan, attended The Liggett School in Detroit, The Spence School in New York City and graduated... View Obituary & Service Information

The family of Nancy Louise Purtell Edwards created this Life Tributes page to make it easy to share your memories.

Send flowers to the Edwards family.