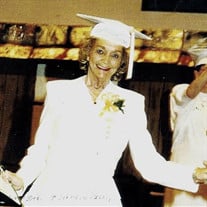 Nell Abernathy Slavich departed this planet on Friday, April 13th, 2018 in the loving arms of her daughter and best friend, Peggy Boyd Long, in Houston, Texas. Nell was born in Pelahatchie, Mississippi to parents Lafayette “Fate” and Trudy Abernathy. At the young age of 16, Nell attended Mississippi Southern College, where she was a star student, cheerleader, fashion model, and socialite. After graduating, she excelled at every career she undertook, including prominent interior designer, celebrity clothing designer, business-owner, writer for the Times-Picayune newspaper in New Orleans, television personality, and co-owner of Abernathy Antiques with her sister Peggy Abernathy Green in Texas City. She was a magnetic woman who always had the room doubled over in laughter with her witty humor. She rarely made mistakes, but when she did, she made sure to remind everyone, “I’m lefthanded.” Nell believed her greatest blessing was being mother to Tommy Biamonte, Fonda Biamonte, and Peggy Boyd Long, and grandmother to Mason Biamonte, Bostin Biamonte, Brittany-Baxter Long, Esq., and Sgt. Cameron Long, all of Houston. Preceded by her brother David Lamar Abernathy, she is survived by her sister Peggy Abernathy Green, nieces Paula Abernathy Melerine, Melissa Abernathy Coyle, and Dr. Kimberley Green Weathers, and nephews Joseph Bernard Green and Tracey Abernathy. The memorial service to celebrate Nell’s life will be held on Sunday, April 22nd, 2018 at 2:00 pm at Dettling Funeral Home, located at 14094 Memorial Drive, Houston, Texas, 77079

The family of Nel Abernathy Slavich created this Life Tributes page to make it easy to share your memories.