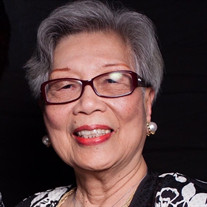 Nicefora Rubio Arzadon, 89, of Houston passed away Wednesday, December 20, 2017 at her home surrounded by her loving family. Mrs. Arzadon was born February 9, 1928 in the Phillipines to Valentin Rubio and Clara Bautista Rubio. She is preceded in death by her husband Bibiano Arzadon and son Spencer Arzadon. Nicefora is survived by her children, Judith A. Tamayo & husband Roger, James Arzadon & wife Maribeth, Sylvia Wright & husband Marvin, Sigmund Arzadon & fiancée Cynthia, Eunice Klinski; grandchildren, Jaysen, Neal, Justin, Christian, Sydney, Aleksy, Simon, Evan, Tyler, Colin; siblings, Rosita Baldonado, Solomon Rubio, Filomena Rubio, Elizabeth Polutan as well as numerous nieces, nephews and extended family. Nicefora grew up in the Philippines where she taught school. After marriage to Bibiano she moved to Bangkok, Thailand where she raised her children. While living in Bangkok, she enjoyed participating actively in the International Women’s Club and the United Nations Women’s Club raising money for charity and attending many social events. Nicefora moved to Houston in 1986 to be closer to her family. While in Houston she enjoyed participating in the Filipino Senior Citizens Club and the Ilocano Club. She was a longtime member of St. Justin Martyr Catholic Church where she belonged to the Mavericks Club. Nicefora enjoyed cooking for her family and loved to sing and dance but nothing was more important to her than her grandchildren whom she adored. The Arzadon family will be present to receive friends, Thursday, December 28, 2017 from 6:00 PM until 8:00 PM with a Rosary/Vigil Service beginning at 7:00 PM at Dettling Funeral Home, 14094 Memorial Drive, Houston, TX 77079. The Funeral Mass will be celebrated Friday, December 29, 2017 at 10:30 AM at St. Justin Martyr Catholic Church, 13350 Ashford Point Drive, Houston, TX 77082. The Rite of Committal will take place immediately following Holy Mass at Forest Park Westheimer Cemetery via motorized cortege. A reception will follow graveside services at St. Justin Martyr Parish Hall.

Nicefora Rubio Arzadon, 89, of Houston passed away Wednesday, December 20, 2017 at her home surrounded by her loving family. Mrs. Arzadon was born February 9, 1928 in the Phillipines to Valentin Rubio and Clara Bautista Rubio. She is preceded... View Obituary & Service Information

The family of Nicefora Rubio Arzadon created this Life Tributes page to make it easy to share your memories.

Send flowers to the Arzadon family.