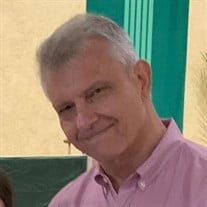 Nicholas (Nick) Lee Stechschulte, 58, passed away in the evening of September 9 at his home in Pearland, Texas. He was the loving husband of Monica Stechschulte for the last 19 years. Born at St. Rita’s Hospital in Lima, Ohio, on April 30, 1961, Nick was the second son of William and Irene Stechschulte from Kalida, Ohio. He spent a happy childhood exploring Kalida with his brothers and sister and playing golf and baseball. After he graduated from Kalida High School in 1979, he went on to earn a bachelor’s degree from Bowling Green State University. He moved to Atlanta where he worked for Siemens Healthcare over the next 24 years and lived in Roswell then Kennesaw. Six years ago, he moved to the Houston area with his wife Monica where he was working as an application systems analyst for MD Anderson Cancer Center. Nick was known as a hard-working, beloved husband, father, uncle, and son who always had a funny story to brighten your day. Nick is survived by his wife Monica, son, Ben Stechschulte, stepson, Andrew Tetrault, his brothers, Tom and Steve Stechschulte, sister, Cheryl Noonan, and his mother, Irene Stechschulte. He was predeceased by his father William. On Friday, September 13, there will be a 9AM visitation followed by 10AM Mass, both at St. Catherine of Siena, 10688 Shadow Wood Dr, Houston, Texas 77043 with the interment at Earthman Resthaven Cemetery following Holy Mass. There will be a private reception for close family and friends immediately following. Flowers may be delivered to St. Catherine of Seina Catholic Church on Friday at 9 am.

Nicholas (Nick) Lee Stechschulte, 58, passed away in the evening of September 9 at his home in Pearland, Texas. He was the loving husband of Monica Stechschulte for the last 19 years. Born at St. Rita&#8217;s Hospital in Lima, Ohio, on April... View Obituary & Service Information

The family of Nicholas Lee Stechschulte created this Life Tributes page to make it easy to share your memories.

Nicholas (Nick) Lee Stechschulte, 58, passed away in the evening...

Send flowers to the Stechschulte family.