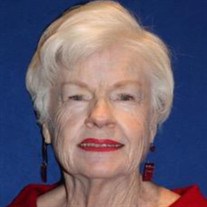 Noreen Frances McGloin passed away on the morning of Monday, December 13, 2021. She died peacefully in her sleep after a fierce but quick battle with metastatic pancreatic cancer. She was 77 years old. Noreen spent the last weeks of her life being loved and cared for by her two daughters, Meryl Lee Gregory and Janine Lee Hergesell. She is survived by her daughters; her sons-in-law Douglas Gregory and Chris Hergesell; and her grandchildren: Jeremy (Georgi), Barrett, and Griffin Gregory; and Charlotte, Sydney, and Max Hergesell; her brother and sister-in-law Thomas and Mary McGloin, brother-in law Ray Brennan, and sister-in-law Claudia McGloin, and many nieces, nephews and cousins. Noreen was born to Mary Costello and Thomas McGloin at Women’s Hospital in Brooklyn, NY, on December 29, 1943. She was born the fourth of five children, with older siblings Thomas, Mary Ann, and Regina, and younger brother Kevin. Her parents immigrated from Ireland to New York through Ellis Island – her mother from County Mayo and her father from County Sligo. Noreen attended St. Athanasius Elementary School in Brooklyn until 1957 and graduated from St. Brendan Diocesan High School in 1961 at the age of 17. She enjoyed summers with her family and relatives in their beach bungalow in Keansburg, NJ. Noreen worked for Merrill Lynch Pierce Fenner & Smith from 1960-1969, both on Wall Street, directly reporting to Mr. Fenner, and for a short stint in Dallas, TX. In her free time she enjoyed the New York nightlife, including visits to the famous Copacabana and Studio 54. She graduated cum laude with an Associate degree in Computer Science from CUNY College of Staten Island, and she was proud to be the first woman member of her Computer Science fraternity. Noreen moved to Houston, TX, in 1980, where she raised her two daughters. Upon returning to the working world, she worked in sales for IBM and in human resources management for Automatic Data Processing (ADP). In 1988 she earned a BS in Business from Our Lady of the Lake University in San Antonio, TX, where she was a member of the Tau Alpha Pi National Honor Society and graduated cum laude. In 1991 Noreen was transferred with ADP to Denver, CO, where she lived for 13 years. She loved spending time in the Colorado outdoors -- snow-skiing, whitewater rafting, hiking, motorcycle riding, and more. She became a successful financial advisor, working for Prudential Financial and Allstate, and took pride in teaching and helping others organize their finances. After becoming a grandmother, Noreen wanted to move back to Houston to be closer to her children and grandchildren. She transferred back to Houston and continued as a financial advisor for a few years before retiring. She enjoyed retirement immensely – spending time with family and friends, volunteering for various organizations, and traveling the world. Noreen was active in the parish of St. Cecilia Catholic Church in Houston, TX. She particularly loved being a greeter at Mass and her membership in the St. Cecilia Women’s Club, where she held many offices including President for several years. Noreen was a member of and volunteer for the Charity Guild of Catholic Women, where she served as Day Manager. She also regularly volunteered at the East Spring Branch Food Pantry, and organized neighborhood gatherings like the annual National Night Out. Noreen was interested in learning and experiencing life to the fullest. She read the Houston Chronicle daily, cover to cover, and sought out so many of the festivals, art exhibits, and other off-the-beaten-path events the city had to offer. She canoed the Buffalo Bayou, took Downtown architecture walking tours, bus day-trips to little-known historical sites, and more. Noreen loved being a season-ticket holder of the Houston Symphony, Houston Ballet, and Houston Opera, and loved attending plays at the Houston Alley and seeing foreign films at the River Oaks Cinema. She was a member of the Museum of Fine Arts Houston, the Museum of Natural Science, and the Botanical Gardens. Noreen remained very active up until her battle with pancreatic cancer. She walked several miles most days of the week, attended exercise classes at the Trini Community Center, and swam 2-3 times a week during the warmer months. In addition to walking and swimming, other sports she loved included bicycling, snow skiing, horseback riding, and scuba diving, as a certified Dive Master. Noreen traveled around the world -- mostly with her brother and sister-in-law, Tom and Mary McGloin, and with friends. She visited all continents except Antarctica and experienced about 50 countries. She had great stories of her adventures: Staying in a Mongolian yurt … hiking Machu Picchu on the top of the Andes … riding elephants in Thailand and camels in Egypt … drinking vodka shots in Belarus … swimming on the back of a manta ray in the Caribbean … sleeping on the floor of a Buddhist monastery ... hiding from a rhinoceros in her tent on an African safari … being one of the first U.S. tourists to Cuba when tourism was allowed again … eating bugs and other unidentifiable exotic dishes in various countries … and more. We will celebrate Noreen’s full life at a funeral mass on Wednesday, December 29, at 10:30 a.m., at St. Cecilia Catholic Church, 11720 Joan of Arc Drive, Houston, TX 77024. A reception will follow at the St. Cecilia Community Center. Friends are cordially invited to attend. As her favorite color was blue -- the color of her eyes and her birthstone -- we ask that those attending her funeral wear a shade of blue or blue accessories/accents. The family would like to thank everyone at Encompass Health Hospice for making her last weeks of life more comfortable, especially Noreen’s nurses Jackie, Amber, Lisa, Lauren, and aide Rosalyn. In lieu of flowers, donations in Noreen’s memory can be made to the Charity Guild of Catholic Women in Houston, TX. https://charityguildshop.org/index.php/donate/

Noreen Frances McGloin passed away on the morning of Monday, December 13, 2021. She died peacefully in her sleep after a fierce but quick battle with metastatic pancreatic cancer. She was 77 years old. Noreen spent the last weeks of her life... View Obituary & Service Information

The family of Noreen Frances McGloin created this Life Tributes page to make it easy to share your memories.

Noreen Frances McGloin passed away on the morning of Monday,...

Send flowers to the McGloin family.