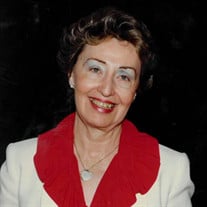 Long time resident of Houston, Norma Lee Bowers, died Monday, March 27, 2017 at home surrounded by her husband of 64 years and her children. Lee was born in St Louis, Missouri on October 11, 1931 to Frank and Marie Murphy. She graduated from Ursuline Academy in Dallas, Texas and completed 4 years of education from The Hockaday, Dallas Texas and the University of Texas Austin, majoring in Child Development. She received the Distinguished Alumna Award in 1987 from Ursuline Academy, Dallas Texas. Lee was not only devoted and active in her husband and six children’s lives, but she was deeply committed to her faith and serving God, Jesus and the Blessed Mother. She has been a long term parishioner at St Cecilia’s School & Church. She made many contributions to the community including Home and School Association committee, volunteered in the school library, clinic and cafeteria. In addition, Lee was a Brownie, Junior and Senior Girl Scout Leader. She was honored with a Special Award from the San Jacinto Girl Scout Council. Lee served in different leadership capacities and committees at St Cecilia, to mention a few, the Parish Council, the Liturgy Committee, the Women’s Club and member of the Alter Guild. Lee initiated and led the 24-hour Eucharistic adoration every Wednesday for 25 years. Lee expanded her devotion to the Galveston-Houston Diocese by help form the Diocesan Marian Activity and was director (coordinator) for over 20 years. In addition, she worked with Msgr Frances Wearden to put on the Mariological Convention for 6 years. She spearheaded the Rosary Rally at Delmar Stadium in 1986 when the Diocesan Travelling Statue of Our Lady of Fatima was presented to the Diocese. Beginning in 1997, Lee actively promoted and lead the lay apostolate of Eucharistic Apostles of Divine Mercy under the Marians of the Immaculate Conception and was responsible for all state west of the Mississippi to the Philippines. This included inspirational and educations talks in Hong Kong, the Philippines and Malaysia. Lee continued to spread the word of the Blessed Mother on her weekly show on Radio Maria. For over 20 years, Lee organized and led over 60 pilgrimages to religious shrines in the US, Holy Land and Europe including Medrgorje, Fatima, Lourdes, Rome, Moscow and Ireland to mention a few. Other organizations who Lee gave of her time to were the Women’s Auxiliary Bar Association, Biron’s Gymnastic Booster Club, St. Thomas and St. Agnes Mother’s clubs, Alpha Delta Pi Alumnae, Alpha Delta Pi Mother’s Club, The Charity Guild of Catholic Women, The Junior League and Houston Assistance League. Lee is survived by her husband, William (Bill) Lee Bowers, Jr, and her 5 children – Mary Ellen Bowers (Lyn Hare), Murphy Bowers (Jackie Bowers), Donna Bowers Percival, Michael Bowers (Karen Bowers) Anna Goessling (John Goessling); 11 grandchildren – Frank Hare, Lilly Hare, Thomas Hare, Lauren Bowers, Nick Bowers, Bryan Bowers, Hayden Bowers, Brighton Bowers, Mikaela Bowers, Kelli Goessling, Jake Goessling; 1 great grandchild – Bruce Bowers; and Sister – Patti Sue Mehaffey. The Bowers family will be present to receive friends Wednesday, March 29, 2017 from 6:00 PM until 8:00 PM with a Vigil Service beginning at 7:00 PM at Dettling Funeral Home, 14094 Memorial Dr., Houston, TX 77079. A Mass of Christian Burial will be celebrated Thursday, March 30, 2017 at 10:30 AM at St. Cecilia Catholic Church, 11720 Joan of Arc Dr., Houston, TX 77024. A reception will follow Holy Mass on the church campus. In lieu of flowers, please consider contributions in Lee's memory to the National Shrine of the Divine Mercy at www.thedivinemercy.org

Long time resident of Houston, Norma Lee Bowers, died Monday, March 27, 2017 at home surrounded by her husband of 64 years and her children. Lee was born in St Louis, Missouri on October 11, 1931 to Frank and Marie Murphy. She graduated from... View Obituary & Service Information

The family of Norma Lee Bowers created this Life Tributes page to make it easy to share your memories.

Send flowers to the Bowers family.