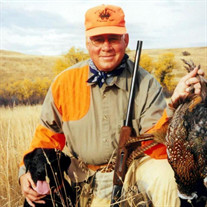 Norman Lynn Utz was born in Dodge City, Kansas on September 9, 1939 and was raised in Plains, Kansas. After an extended illness, Norman fell asleep peacefully on June 9, 2022 and woke up in the arms of Jesus. Born to Cleo and E. Lowell Utz, Norman grew up a big fish in a small pond. He excelled at both athletics and academics, playing varsity basketball, running track, as well as being quarterback for the football team. His 4x100 relay team won State with dad as lead off runner. Norman played first chair trumpet, and the school was so small that he had to change out of his football uniform and into his band uniform for the half time show. He graduated top of his class at Plains High School. Norman and his little brother Neil were raised by loving parents. Lowell was a wheat farmer and Cleo was the editor of the Plains Journal and a devoted wife and mother. Neil and Norman worked side by side with their father on the farm and after the winter harvest they would pack up the old Plymouth to head to Colorado. The family hiked, fished, laughed and truly enjoyed each other. The Utz families’ love of Colorado continues to this day. Norman was recruited by Sam Butterfield to play basketball in the big city of Hutchinson, Kansas at Hutchinson Junior College where he played point guard. While at Hutch Juco, Norman met the love of his life, Hutch Juco cheerleader and the mayor’s daughter, Sharon Stremel. Norman and Sharon married while at Fort Hays Kansas State Teacher’s College where their oldest son Troy was born during finals of their senior year. The young family moved to Waco, Texas where Norman took a job as a pharmaceutical sales rep. Their daughter Polly soon arrived. Shortly thereafter, Norman was promoted and moved his family to Corpus Christi where their son Todd was born. The family returned to Waco as Norman began his illustrious career as a financial planner with Merrill Lynch. Norman was very involved in the community, coaching basketball and little league baseball for his kids and countless others. He also held board positions at the Boys and Girls Club of Waco. Norman rose quickly with Merrill Lynch and was moved to the New York City office. Within a year he was promoted to the position of manager of the Houston Galleria office. Norman finished his 27-year career at Merrill Lynch as a financial advisor in the downtown Houston office. One of his proudest moments was having his son Troy join him as his partner at Merrill. After a highly successful career, Norman retired at the early age of 55. Second only to his family, Norman’s greatest love was the outdoors. He was an avid bird hunter. From his early days shooting pheasant in Southwest Kansas to trips across the country with his family, friends and his loyal black labs, he never tired of seeing a sunrise over a duck pond or a covey flushing at sunset. Some of his favorite spots were “The Place” in North Zulch, The King Ranch, “The Hole” in Galveston and Pearsall. Norman and Sharon’s home, Los Veranos, in Pagosa Springs, Colorado, was one of his favorite places in the world. On a cool autumn evening, you would find Norman and his faithful lab sitting on the deck, enjoying the fading light on the San Juan mountains with a martini in one hand and a cigar in the other. Norman and Sharon loved nothing more than to fill their beautiful home with friends and family. He was a master storyteller and liked to “hold court”. You knew you were in for a whopper when he got rolling. Norman was preceded in death by his parents, Cleo and E. Lowell Utz and his great-granddaughter, Emerson Rose Miner. Survived by his loving wife of 63 years, Sharon Stremel Utz, his children Troy, wife Sarah of Houston; daughter Polly, husband Mike of Dallas; and son Todd, wife Jill of Oklahoma City. His 9 grandchildren who will always lovingly remember him as Papa - Marshall Utz, wife Korey and great-grandchildren, Griffin and Russell; Travis Utz, Alison Utz, Benjamin Campbell, Cate Campbell, Madison Miner, husband Harrison and great-granddaughter, Eden, Abigail Utz, Olivia Utz and Grace Utz. Norman is also survived by his brother Neil, wife Karen and nieces and nephews Katie, Ryan, Jessica and Kendall as well as sisters-in-law Suzan Stremel and Jan Stremel. Brother-in-law Bob Stremel, wife Lexie and sister-in-law Linda Fleming, husband James as well as many nieces and nephews. The family would like to thank his loyal and attentive caregivers - Ana, Laura, Yessi, Jenni, Lulu and Wayne. In lieu of flowers, donations may be made in Norman’s name to Ducks Unlimited, Texas or Texas Parks and Wildlife or the charity of your choice. A celebration of Norman’s life will be held Saturday, June 18 at 11:00 am at Memorial Drive United Methodist Church, 12955 Memorial Drive in Houston, Texas. Reception following the service at Lakeside Country Club. The service will be live streamed at www.mdumc.org/normanutz .

Norman Lynn Utz was born in Dodge City, Kansas on September 9, 1939 and was raised in Plains, Kansas. After an extended illness, Norman fell asleep peacefully on June 9, 2022 and woke up in the arms of Jesus. Born to Cleo and E. Lowell Utz,... View Obituary & Service Information

Livestreaming will be available at www.mdumc.org/normanutz fifteen minutes before service time

Send flowers to the Utz family.